in which the fish tells of a happy ending 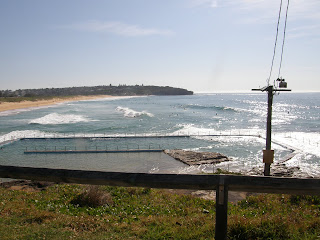 I saw the shark-net man and his boat laying out the nets and my heart sank. The silhouette in the hard glitter on the first day of the season moved along, dropping the curtain of silver rings in to the deep.

Surf Patrol not yet started, the sea quiet, the beach lonely.

After only two days, the word was out: there is a shark stuck in the shark net!

Kayakers and paddlers, perhaps even swimmers, had seen it there struggling.

Hilariously, the Police were called. There were nine of them, summoned by various phone calls by the distressed paddlers. All had phoned the police.

Seven uniformed policemen stood lined up along the edge of the rock pool and gazed out to sea.

Fur Coat, doing his laps, stopped and leaned a wet elbow on the edge and asked

What ya gonna do about it, mate?

and the constable nearest him answered,

Buggered if I know

Paddlers in their kayaks, looking down as they passed, saw it struggling, caught in the rings.  All day and night I am filled with the horrible vision of the shark caught there, wriggling and thrashing. Some say it is a Tiger shark, which puzzles me. All these months the creatures of the sea have had free passage to do as they wish, and now here is this awful obstacle suddenly appearing out of nowhere. Today a shark, tomorrow a turtle or a dolphin.

Naturally people get very emotional about the issue. Anything to do with a shark terrifes all and sundry, but truth is the likelihood of being bitten is so slight.

I dreamed of the shark. I wondered how long it would struggle , bewildered, before dying.

Next day I was drying off after my swim. I mentioned the Tiger Shark to Trumpet., wondering if it were still alive.

Tiger shark? he said. No, it was a Grey Nurse. Oh, the coppers all lined up on the edge, gotta laugh...


But just before tears sprang from my eyes , he said

The Boat crew set it free.


The Boat crew who had been training that evening, had heard about the shark. They had rowed their wooden surfboat out to the nets, lifted the heavy steel with their oars,

which, having been let loose, 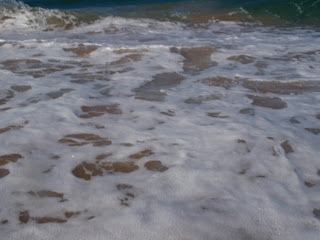 I'm not crying, there's just something in my eye. Both of them. I have a deal with sharks, they stay in the water and I swim in swimming pools. It's worked well for us so far. I'm so glad that the boat crew freed the shark. Respect for the sea and it's creatures is so important.

I have pretty much the same pact as Mindy although I do love the sea and fret if I don't live near it I have to admit I am afraid of what lurks beneath it- an unproductively overactive imagination! We don't have shark nets here so I had not even thought that other animals would get stuck in the net...it is a 'shark' net, they only keep out people chasing fierce sharks intent on terrorizing humans. You make a good point fifi.

I love that you love sharks.

WHEW! I held my breath through this entire post- Oh NO not more human idiocy at the expense of another life form...WHEW! thank you for saving me from more grief...

Hope this story turns up in tomorrow's Manly Daily - the SMH would be good too. Your sentiments are beautiful, and the actions of those guys is breathtaking - reminds me how good humans can be.

How odd, I was only thinking on this topic reading the story in the smh about these people http://www.smh.com.au/environment/conservation/from-a-dust-storm-to-the-stormy-seas-daves-ocean-crusade-20091002-gfjy.html Love your happy ending for that gentle beast

I am as likely as the next person to freak if I see a shark in the water next to me. I know this through experience, but having said that, knowing one is dying slowly because of these STUPID nets is truly horrible.

So many things are caught in them all the time, I see them being lifted out, though its not quite close enough for me to identify them.


If I had the time I would certainly join those anti-net campaigners, Curious, yes I would.


I was particularly touched that the Boat Crew did that, given that they aren't generally known for their kindnesses, more for their beer drinking, misogynistic ways.....


people can surprise me.

fifi you are such a softie and I LOVE that about you. This is such a happy story & I really appreciate it today.

What a wonderful outcome. Thankyou for sharing this with us.XX