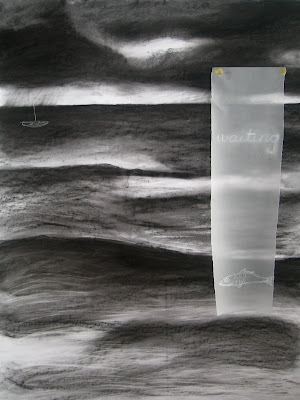 "I have dreamed in my life, dreams that have stayed with me ever after, and changed my ideas; they have gone through and through me, like wine through water, and altered the colour of my mind." - Emily Bronte
I have dreamed one of my dreams for all my adult life,only recently I remembered who it was about.
Sometimes we hold onto things so tightly,
that they become embedded within us.

Just before dawn, I dream of things I wish were real, and wake up with my hands clenched. Even in the dark, you can recognise things by feel.
Posted by fifi at 9:22 PM 1 comment:

the idea of flight 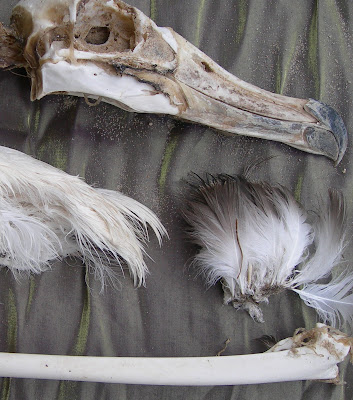 Only once in my life,
have I seen an albatross flying.
It was early, and something made me turn my face to the sky,as it passed directly above. It was enormous, wing tip to wingtip, white mottled with brown. Large beak, curved down at the end. It seemed as if those few seconds were longer than normal, but it was cruising at speed, and disappeared.
Later, at the wildlife hospital with a little shearwater, I asked if I could raise it , instead of having it euthanased. The doctor explained that seabirds never come to land, except to breed. They spend their entire lives at sea, flying, fishing, resting on the surface of the water.
I imagined all those big albatrosses endlessly soaring over the oceans, and never coming to land. You just have to believe that they are there, for you'll not ever see one, (unless you are a longline fisherperson and catch one nastily on your line )
or unless you have a fortunate moment. like me. A sort of "act of faith" in believing that the birds even exist at all, given the lack of evidence.

I found an expired albatross, washed up on the shore last week. It was wet, and bedraggled. Fish had eaten its innards, right out of its chest cavity, but the rest was there. The feathers hung like string.
I dragged it up onto the dry , where the white sand shone with endless sun and ghost crabs hid from the heat.
By noon, it was dry and clean, and with a brief closing of eyes in apology, I took its wing bones.

They were long and white, hollow like pieces of bound air, hardly like bones at all.
The next day, the ghost crabs had cleaned the rest. I took its head,like a barbarian crouching over the vanquished, I took its skull, and all its feathers.

The bones were white , hollow and flute-like, speaking to me of the weightlessness of flight. The curving beak told me of its albatross-pedigree, and the chest feathers, gleaming like snow, remembered their own reflection on the icy surface of the Southern ocean.

Empty eyes showed me a landless horizon, whitecaps all around, and the memory of endless flight. Evidence, in my hands, of elsewhere
Posted by fifi at 4:48 PM 3 comments: 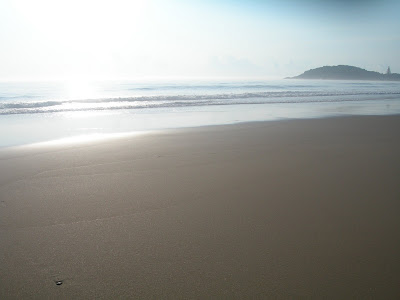 drawing in the air 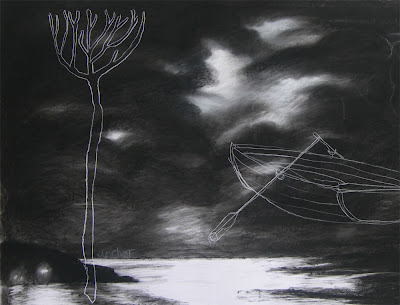 Last night in the heat, the sky outside was lit from a distance, everything else was shadow,
the suburban industrial estate where I paint was quiet and still.
Listening to Allegri’s Miserere while painting a stolen fragment of Renaissance sky, I
looked up outside, and a huge albino fruit bat sailed directly overhead,
a white bat.
The miserere was written to be sung during Holy week. How appropriate! A week of painting is holy.
Midnight was long gone when I returned home, I wish I could stretch the days longer and longer.
Except that I love to sleep, I would never close my eyes on the day at all.

What I like to do, is live vicariously on a wild sea coast, where it isn’t hot, an imaginary place assembled from a few fragments of image. It simultaneously exists on a blinding blue coast, where it isn’t wild and cold. But I was hot to the core today, I felt like a blacksmith, and no thought of windswept rocks or rushing tidal straights could cool me down. So I only existed in one place, really, like a usual person.

I used to draw pictures in the sky with my finger,
Very complicated pictures, in an act of creation so completely engaging that it rendered me immobile , one finger pointing at the sky. Or at the roof of the church hall, where I was supposed to be doing some idiotic physical culture routine like all the other girls.
What IS that stary-pointing thing you do? would ask my mother, horrified at my isolated stillness among the moving bodies.
“Drawing,” I would reply, squinting out from between my messy plaits. Its just that my drawings were only visible to me.

I still like drawing in the air.
Posted by fifi at 12:01 PM No comments:

I love pomegranates,
Seeds hidden inside a translucent ruby, chaos inside an orderly exterior.
Not-quite-a-sphere, with claws at the top.
I painted and painted them, admired them, read their mythology,their iconography,
but I had never eaten one.
I didnt want to become like persephone, hidden in the dark.

But just the other day, I put some in my mouth, drank the bloood and swallowed the seeds.
Afterwards, the sun still shone.
And i remembered long ago,
drinking pomegranate juice in Istanbul,
so perhaps the seeds restore memory.
Posted by fifi at 12:46 PM 3 comments: