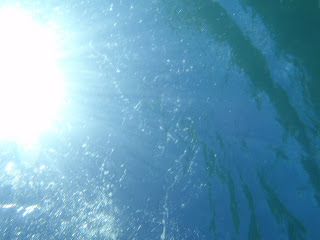 I have spent the last two years seriously considering the notion of drowning.
I have made pictures of it, read about it, considered it in cultural terms, in aesthetic terms. How drowning is considered a feminine death, a womanly thing. The relationship of madness and drowning.

But the reality of drowning here and now, in the real world, intrudes upon my considerations. The secret truth of drowning, not the paintings of Ophelia, of female martyrs, the literary drownings of Edna Pontellier, of Maggie Tulliver. The truth is it is men who drown, men who overestimate their capabilities, who are reckless.
Four people have drowned this week, three men and one woman. Three of whom went in to retrieve children, three of them on unpatrolled beaches. 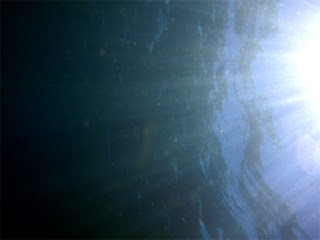 I swim in rips. I swim when the beach is closed, I swim when the surf is outrageously huge. I can do that, because I know intimately every breath the ocean, here in my small stretch, will take. I know each  bump and runnel of sand beneath. Every artery of pulling water. I have competed in marathons swims of up to 10 kilometers. I have swum in the ocean every day for at least twenty years.

Even so, I rarely swim at unpatrolled beaches and when I do it is usually at a very shallow depth. Unknown waters make me nervous, edgy. Who knows what secret rips lie beneath? what unmet creatures? If I swim I wear fins, in case I need to sprint to shore. I holiday at a remote and lonely beach, where the cicadas are shrill and the dry heat bites, and I am always cautious. Dolphins once herded me to shore when I set off to do a swim along the beach. They circled me and drove me in until I was knee deep.

Dolphins, as benign as they are, are still colossal great mammals, dark and sleek. To have them suddenly appear at eye level is disconcerting at the very least: a fin is a fin at half a meter away. To have a whole bunch of them appear and shuffle you to shore is alarming, and I wonder to this day whether it was a shark they were herding me away from, or their babies. The pod is a familiar sight at that beach, and they delight in catching waves next to surfers. As I said, it is vastly different to see dolphins from the relative safety of a board from seeing one eye to eye with no warning. With nothing between you.

I think of that pod often, the way they appeared, how huge they looked, how close they came and how insistently they urged me to the shallows before departing themselves back to the deep. It was an overcast day, and few people were around. The water, as is usual up there, was the temperature of bathwater, and full of fish. I was  swimming  parallel to the shore, in not too deep water, nervously trying to concentrate on my stroke, when the dolphins appeared and sent me out. I remember standing knee deep in the surf, incredulous at their cheek.
There was a shark the next day, though to be sure, there are always sharks. 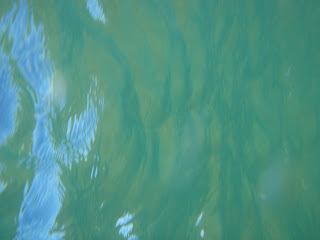 It only takes twelve seconds to drown.

I remember one time leaping over rockpools so I could reach three five-year-olds who, washing their feet, had spilled into one of the waterholes were drifting in the rip.
Drifting very quickly. Nonchalantly, the sea had reached a hand and hooked the children to itself.

It is hard to hold three children at once, the thing is to make it a game. A chain, holding hands hold tight, children ring a ring a rosy ocean in your nosy
Twelve seconds.
The lifeguard had gone home. 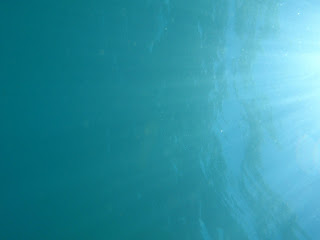 The pull of the ocean against their small hollow chests. The weight of them, needing strength to pull them in, this little chain of bodies, laughing. Had the water been even two inches deeper when I reached them, I would have lost them to the muscled pull of the ocean. Heard the crack of heavy water against frail clavicle, and even frailer lungs. 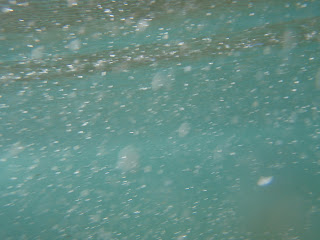 Once when I was sixteen,

I was surfing at an out of town beach with my then beloved.
The wetsuit he gave me to wear was archaic, and meant for a boy. Girls back then, didn't go surfing, and my physiology made the suit too tight in places and loose in others. It had no zip, just a wide neckhole.

Way out to sea, the beloved sat in his usual position, hands on thighs, nonchalantly watching waves and  ignoring me. Was I an embarrassment? Or too capable a sea creature to be watched over? Girls were supposed to be looked after, but I was a top class swimmer, better than him and he knew it.
I took off on a wave, stood up, and nosedived immediately.
The board washed in and left me stranded in the deep with a whole nation of waves and channels through which to travel.
I set off towards shore, quite a way, but, you know. Swimming was my thing.


What I had not accounted for were the binding qualities of wetsuit rubber, the weight of the water and the way the sea entered the suit, filling it with a weight and inflexibility I was far too slight to fight against.
Unable to escape, the water made me sink to the ocean floor. I could barely raise my arms.
The beloved rose and fell from view, still looking out to sea, flicking his hair in the sunlight.


I sank to the bottom.
And had an idea. I ran along and then pushed as hard as I could to the surface, like a seal. Took a breath, sank again, ran again, and pushed. So I was running along the seafloor, and then rocketing up for air. All the way to shore. 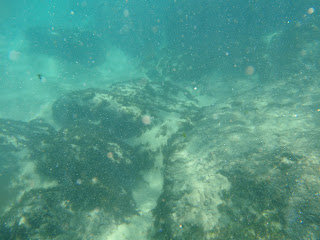 When I made it to the sand, I lolled and flapped there like a sea lion.
A bunch of boys sitting on the sand clapped and grinned and hooted, catcalling and whistling. I tried to remove myself from the wretched wetsuit to find that I couldn't budge it and was wedged inside. Self consciousness, the default setting of the teenage girl, made me weak, and hot in the face
I writhed and twisted and pulled. I used feet hands teeth rolling this way and that in a fury, wedging it up over my head, blinding myself.
With wetsuit stuck between chest and upraised elbows, I pulled it with my nails with superhuman strength, millimeter by millimeter, until finally my face was free with a loud sucking plop.

I flung the wetsuit onto the ground and collapsed onto the sand by the waters edge, exhausted. The boys still hooted and clapped. I stood up, adorned with tatters of my own dignity, and arranged my bikini into a logical order, trying to ignore them.

Mute with rage when the beloved finally sauntered in, I watched as he flicked his hair, glanced at my audience, and gave me a look, as if to say, have you been flirting?
I wanted to say I have been drowning,
I sank to the bottom of the sea and you didn't save me. All you care about is that I have attracted attention from other males.
Words evaporated on their way out of my mouth, and I said nothing. The tightening of his lips, in the very corners, gave it all away.
He was not beloved for very long.
***

Here and now, among the crowds of holiday swimmers, twelve people on the beach are staring out to sea. I can hear them calling out to swimmers who stray, I can see them circling the swimmers on their yellow boards. I  can see also those invisible folks on the beach, who will leap to their feet and go to the rescue of anyone who looks like they may be in the wrong place, whose eyes , like mine, will see these things, who cannot help but watch. I can see the dawn patrol who saved the bipolar man from heaving surf one morning at 5am: myself, the vet and the dentist. And I know in those deserted places all along the coast, far away from here, the only watching eyes are those of birds, of dingoes, of dolphins, of silver bream.
No doubt one day  the sea will get the better of me. It will capture me and I will become a part of it forever.
But for now I am watchful of myself and of others.  The ocean is a vastness and a terrifying force: this week has proved that so. 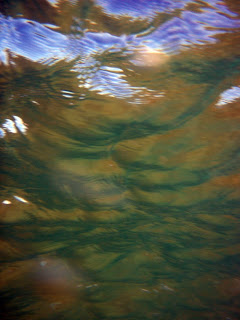 I am going now to be in the sea, to have a few words, to pay my respects.
Buy myself some time.

the year of the fish thus far

Somebody got on a plane. 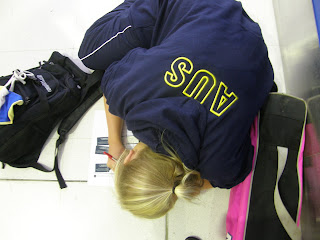 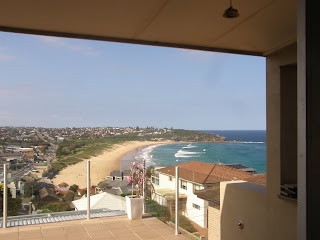 to arrive in this 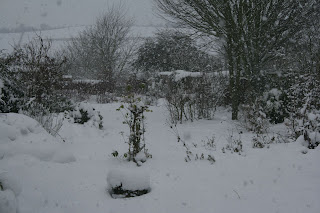 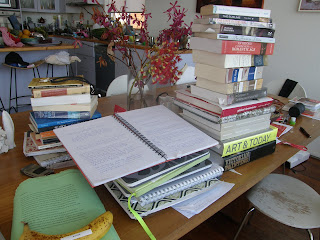 I myself have had quite enough of this 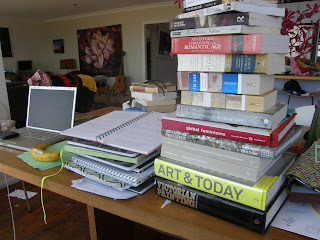 and more than enough of this 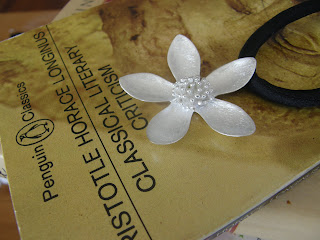 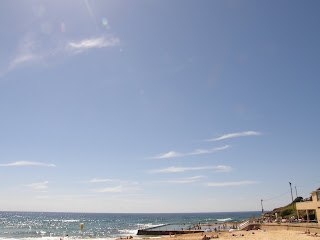 May your new decade be prosperous and fruitful.