apropos of my last remark 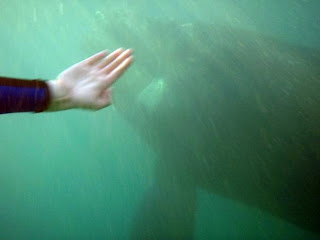 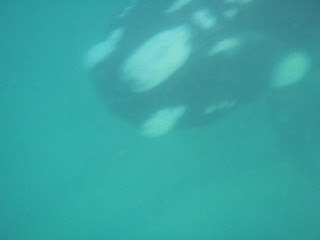 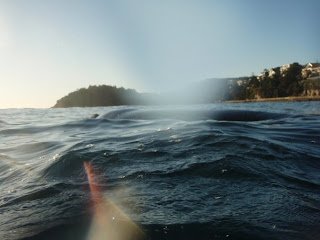 (outside of Shark net season)

"A six-metre long baby humpback whale has been freed after becoming tangled in a shark net off Kirra Beach on the Gold Coast.
It took three hours for a 13-strong rescue team to cut the whale free while its mother waited nearby, Matt Davidson, an officer with the Queensland Boating and Fisheries patrol said.
After being alerted by a shark net contractor that the whale was trapped, four crews, including one from Seaworld, used special "shoehorn" knives on the ends of poles to cut the net, while a strong northerly blew and sea conditions deteriorated.
"Once you lay the knife on the whale's body, it is manufactured in a way that will not cut the whale," said Mr Davidson.
The whale was unharmed and resumed its southerly migration, he said.
This is the second time a whale has been caught in nets off Kirra beach and the third incident involving humpbacks on the Gold Coast this spring.
On September 1, a humpback measuring eight-metres was freed at Kirra and on September 28, a 10-metre whale suffered tail injuries in a net off Miami Beach before being released.
The numbers of whales becoming entangled in nets is likely to grow as the humpback whale continues to recover from coming close to extinction in the 1960s, the chairman of the Australian Whale Conservation Society, Paul Hodda, said.
‘‘They are designed to kill sharks, to keep numbers down and unfortunately they kill whales, as well as other marine animals including turtles, dugongs and harmless sharks,’’ he said.
An estimated 10-14,000 humpbacks are migrating south to Antarctica this spring after breeding in warm northern waters and this is likely to increase again next year, he said.
Rescue crews are on hand around tourist areas like the Gold Coast, but in other less populated areas, whales become entangled and die, he said.
He called on people concerned about the impact the nets have to lobby politicians at all levels to get rid of them.
Alternatives which are not as dangerous to whales, such as drums anchored to the seabed with sharkbait on hooks are available, he said."

My farther, now passed away, bought many years ago, a New Zealand invention, called a "fly catcher", for his home at Willoughby, in Sidnee.

A plastic contraption, that you stuck meat in the bottom of the thing, to attract flies, which it did very well, homing-in to the rotting meat, the flies would become trapped at the bottom and die.

However, he ditched the contraption after some time, as he felt the number of flies had increased significantly, after setting up the catcher!

I wonder if the number of sharks would increase if the stupid idea of...

"Alternatives which are not as dangerous to whales, such as drums anchored to the seabed with sharkbait on hooks are available".

Lets put drums anchored with sharkbait off all Sidnee's beaches, ditch the shark nets, and the problem will be solved...giveeme a break.

As I swim every morning from the beach out to the northern headland at Mona Vale, I have very little sympathy for sharks, give me shark nets and not shark bait.

oh, Dave!
I probably should have snipped that last bit of the article out, as it is very stupid indeed.
You know the sharks are there, just as well as I do, and you probably have seen stuff stuck in it too.

The things that get trapped in the nets are usually not the bitey things anyway. Sometimes turtles.

I hope this means we are still friends...promise I will not encourage sharkbait-drums. Promise.

Aw well I am glad he was freed.

We only ever see seals here. I did see one the other week up in Northumberland, diving in and out of the water. But we have no shark nets obviously.

Fifi...love your blog...always friends, see you at this years ocean swims, cheers David

Good.
I look forward to seeing you too.
x


RB,
seals would be nice.
there are sharks there though, but I guess you dont see them.

Absolutely Fifi, the last bit in the article is very stupid.

And here's an uncanny link to Dave's story. There were a bunch of shark attacks off Dunedin's beaches in the South Island in the 1970s. My Dad, a lifetime local, blamed the attacks on the dirty practices of the fishing trawlers that had just begun to "farm" the waters. He was right - they were dumping offal overboard and the sharks were drawn to the blood. My brother witnessed one fatality (he saw some lifesavers were weeping as they dragged in an empty line), and someone I knew just made it to shore with half his board bitten off. Despite these horrific events, shark nets seem incredibly cruel - it's their world, after all. I choose to stay in the sand, coward that I am! I'd drown before the sharks got me anyway - ha ha.

Perhaps it is a stupid thing to say that shark net are bad. The thing is, I swim all winter when the nets are not there. So do many people.

And sharks DO behave aggressively due to human practices. there was ameatworks in byron bay for years, and in south Australia they throw burly so that great whites come for those tourist cage-dives...etc.


Its an emotional issue i guess. Just my own personal opinion.
having been followed by a shark out to sea, i like to think that the fact i wasn't bitten is a clear indicator that they are all around us, and not usually interested in harming persons if they can help it.

You were followed by a shark - that is beyond my comprehension. Despite what must have been something incredibly scarey, your heart remains with the sharks - that's incredible. I reckon the shark read your personality and knew you were OK. Followed! Cripes!

You're a brave woman, Fifi.

Hi Fifi, I apologize for the clueless nature of this question, but so many times I do not understand the back story or context to your entries, including the imagery. In that spirit, could you please explain the first two pictures? Is that your hand in the first image?

What a truly amazing experience. These things are so much deeper than our thoughts allow. Amazing.