In which the fish is teaching Molly to make a Linoblock print. 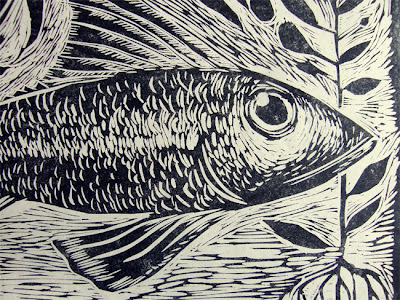 This is for molly, but you may all join in and play if you want to.

Things you need for linoblock printing

If you wish to make Lino prints, you will first need to get these things.
(don't forget to click on the pictures so you get a good look at everything. 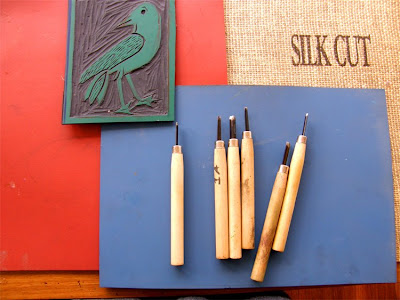 There are lots of kinds of lino. some is very rubbery, some you can use both sides of, whatever kind you get make sure it is flexible and not hard as a rock. If it doesn't bend easily, it's too hard. Silk cut is a good brand to buy. I use lots of different kinds.
A little packet of tools with different sized blades is good and some kinds come with a little sharpening stone in the pack. This is good too.
You will need also a packet of disposable surgeons gloves, and a piece of plate glass or a big shiny tile to roll your ink out on. 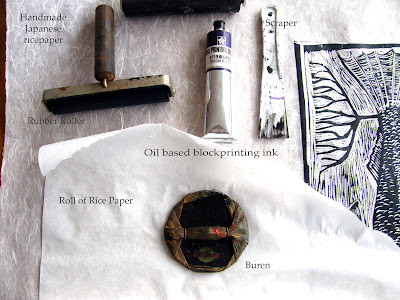 The paper you will need has to be soft and fine, like rice paper. I have found that foreign language newspapers can be nice, as can the pages of a phone book, but they are high in acid and therefore will yellow easily.
A roll of white rice paper is the best thing but gather some bits of nice printed or coloured paper for some chine colle. 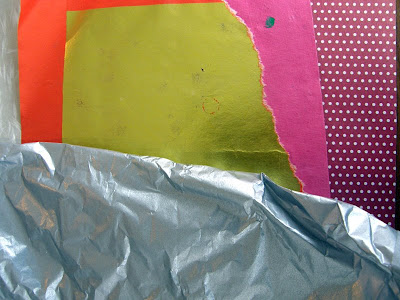 If you can't, get the lino or the tools, you can kit yourself out with one of those foam trays that various food items are packaged in, and a sharp wooden skewer. Then at least you can make something, and it's practically free. 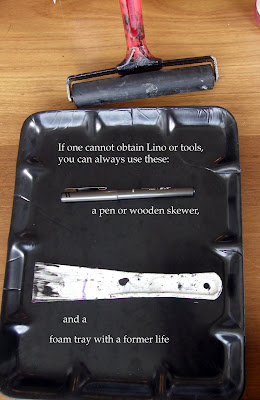 You will also need a picture to draw onto the lino. You will be drawing in onto the lino with a WHITE pencil. Your design can be someting simple, and remember that with this technique, sophisticated is not always the most successful. Blockprints have a lovely rough hewn quality to them. Your drawing can be tonal or just shapes.
Why not do a bird? Or something from the garden or sitting on the windowsill? 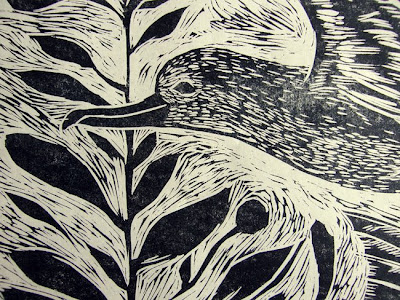 I hope some of you may want to play this game but as a kind of a meme, it IS a bit more um, physically material.

In which the fish is rounder than she thought

I suppose it all started when this happened:


They were loose last time I put them on. I know they're a decade old, but perhaps two months of comfort eating has left its mark. I hardly ever wear jeans.
The minute I sat down in them, my nether end made contact with the outside world in a big way, which was seriously depressing. So I put on a dress instead, and went to the fruit market. 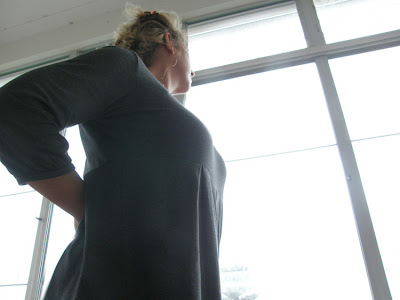 (This is called serious foreshortening, but do note the staightness of the falling drapery.
)

One of the ladies who works there eyed off my smock dress. 'So, your'e expecting!'

thinking to myself what a rude beast she was, and smoothing down my front, to show her nothing there. I mean, I am ample, but as far as I remember, the baby bump pokes out the front, not the back. hmph.

'oh, thats good', she continued cheerily. 'It wouldn't be such a good idea at your age!'

You just wouldn't say it, would you? 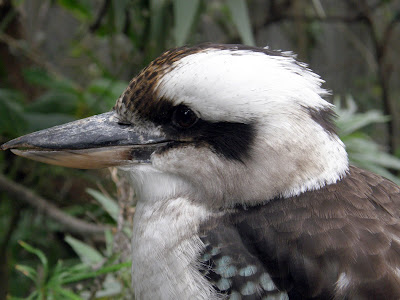 Feeling rather sorry for myself and my battered self image, I arrived home and wandered out the back. This little guy was sitting on the back of one of the chairs. I went and stood right beside him.

He gave me a look and asked, 'what is it you want?'
and I realised that birds know no boundaries, they have no word for old, and to him, I was standing in his garden. The mound of droppings under the chair informed me that he sits there all the time.
"Tell me your name" I said, and he clacked his beak before returning his gaze to the lizards in the bushes.
I couldn't make out what he said. 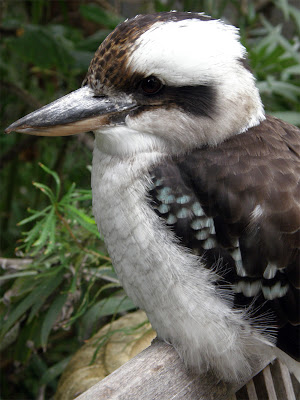 I left him to it, and decided to take my chances on the sea shore. 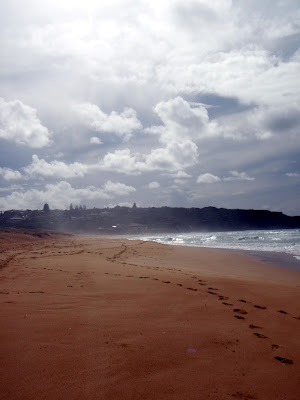 ' you old snash, you old stinky'* I shriek at the sea. 'Can't keep me out'
It was still rolling about in a sly and mean fashion, that sea, and there was a sign saying 'beach closed'.

The lifeguards stood up and moved to come down when they saw me going in, but I adopted the guise of a blackfish and slipped in low. They both swore they saw a person for a second, but convinced themselves they must have been dreaming of fish .

When I was deep under I found myself turned the colour of stones, greys and blacks. I liked the feel of my hair tugging and floating. My heart racing as I slip along channels and wash down the beach. No fish here! I call to the startled fisherman.

And while I am there I think of many things. Poems and pictures and stones and magic and birds and fish.
I emerge with a headful of wonder.
Sinkers the Lifeguard stands up, and scratches his head.
The smell of fish and chips drifts down from the cafe.
I shake out my wet hair, and go shiny and dripping back home. 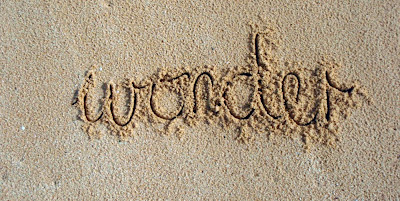 *Acknowledgment for this phrase to Ganching. See Seamus at his Rest
Posted by fifi at 8:23 AM 18 comments:

In which storms blow through the fish's bones 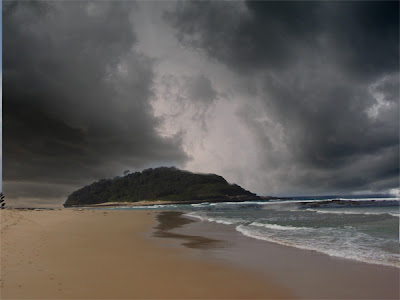 I am on the far south coast.

I have come here every year in this decade of drought, and the sun has always lit and warmed this world.
Illuminated the trunks of trees and made shine the sand. Reflected from the water in all its forms: the brown of the lake and the lapis of the sea.

Last year I hunted for the perfect stone among hundreds on the beach, it became my obsession, there were so many stones, and all seemed perfect. Here one lovely, there another, Jade and speckled, silver and banded. Always another lurking a little further on for me to gather, the world’s most perfect southerly stone.
The almost-perfect one I threw onto the ocean as an offering. The perfect one I kept, and bound with cord to the most beautiful northern stone, and later they flew with me, both to the northern half of the globe. They are there still , but I am not. 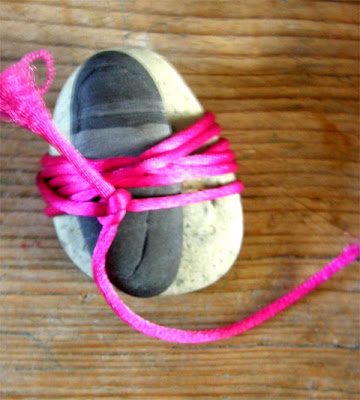 The day before yesterday I braved this newfound wind and rain and went to find the stones, but this year there are none. They lie buried deep, by tides and wind, deep in the sand. I wandered up some way, among the piles of kelp with their mournful salty tang, pondering the disappearance of all the stones, and saw above a huge seabird, almost white with mottled brown. It soared and dipped, then disappeared. The horizon rose and fell, the sea dark green and laced with wild runnels of white as far as I could see. I knew if I walked in it would snatch me to the depths, and no person would ever know. You could walk an hour and not see a soul, not reach an end, just walk forever on this endless beach. So I kept out of reach of snatching waves, just this once. I am not going to my end, not just yet.


That night , I walked down to the edge of the beach where the kangaroo grass gives way to a broad expanse of sand, and the island is a barely discernible shape, black in the darkness.

There was no moon to cheer me, and ragged clouds rolled towards me in bands, pushed by winds howling across the Southern Ocean. The noise of such winds, screaming through the She-oaks and hunched scrubland on the edge of a vast expanse of ocean, possibly the aural definition of melancholy.

This wind and dark rushed at and through me, through new formed spaces in my bones I had not known were there till now, as I stood there alone, wind tearing through my very chest. Ragged and desolate, The night found every crack and space: as if I were a house worn down by sea winds for centuries, my paint blowing off my boards like splinters of snow, my foundations creaking, moaning for my inhabitants to return to me.

The blue of this night the coldest shade of indigo, I felt then the emptiness and loneliness of this landscape, the enormity of space and distance, and the fragility of bones bleached and worn by the tide.


Sometimes the world seems overwhelming. My cubs saw fit to see the world in quite another way: they ran and paddled and postured and paraded, they rowed and swam oblivious to the murderous intent of the wind and clouds and sea. They defiantly rode waves with their father, stepped on sea urchins. They were a blur on the edges of my vision.

I turn my back. I wait for the storm to pass: It shouldn’t be for long.
The universe twists and turns in upon itself, one day infinite, the next moment contained in the smallest of things. 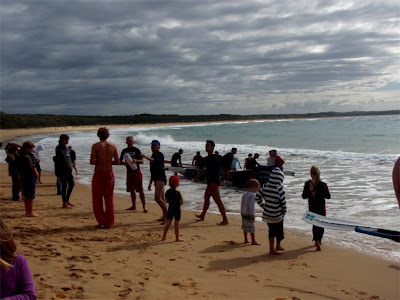 Here is the rain, storming down on the sea. 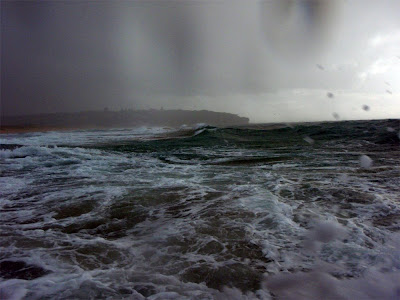 Here are the drops, seen by the fish from under the water 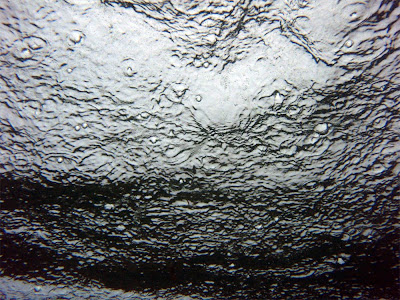 and with eyes just above. 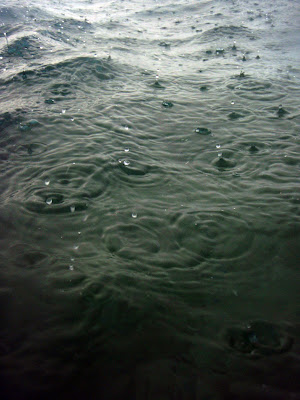 and here is the rain as it looks 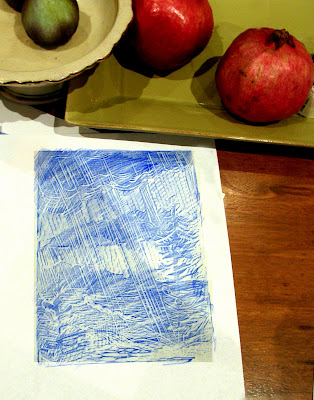 in the lino print that I am doing, sitting at the table,
watching the rain out the window.
Posted by fifi at 9:43 PM 11 comments:

drowning deep inside of me 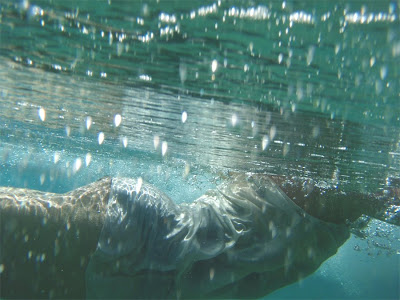 Daylight licked me into shape,
I must have been asleep for days,
And moving lips to breathe his name,
I opened up my eyes.
And found myself alone alone
Alone above a raging sea,
That stole the only boy I loved
And drowned him deep inside of me 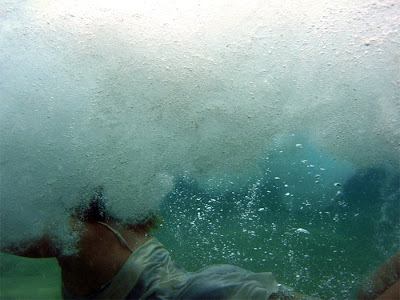 You,
Soft and only,
You,
Lost and lonely,
You,