Tectonic chaos: In which the fish swims at the feet of The Buddha

So.
That was more than a just a shiver in the spine of the fish
as it passed through the deep waters far away. 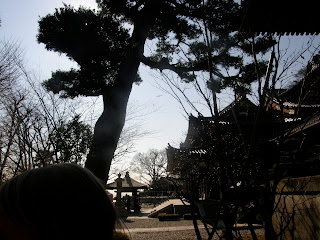 After I returned home from Japan, the tectonic plates gave an unholy shudder,
after which, the ocean broke it bounds, came flooding in,
erasing lives and places.
So fragile, that border between sea-and-not-sea.
And how cruel the huge surge that came shouldering its way inland. 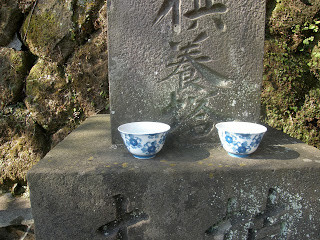 The Great Buddha at Kamakura has survived a tsunami before, and I imagine it sitting there serenely as the ocean rises up to meet it
but the little potters studio I visited, and the shop with the antique indigo cloth, are likely to have been inundated. 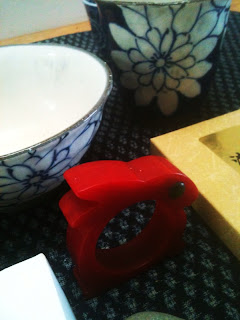 I remember lingering to watch the potter, noticing the trays of damp, chocolatey pots awaiting his hand.
I complimented him and spontaneously bowed in deference to his craftmanship, as you do.
He was very pleased, and grinned as he bowed in return.
He then continued to work on his pots.
I think now the way that, underwater and untransformed by fire, that tray of unfinished bowls may well have reverted back to the earth from which they came. 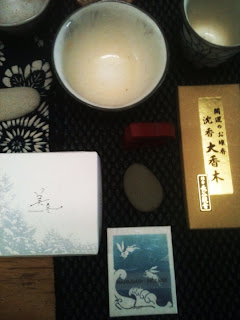 I only bought a couple of his small pieces, as I was worried about carrying them. I have now set up a litle shrine, for Japan. The incense is from the Temple at Kamakura, where I visited the shrine of the goddess of the sea. 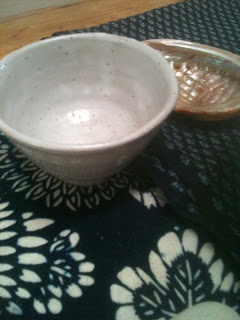 In the temple of the Kannon at Hasedera,
the statue of the 11-headed kannon, or Boddhisatva of Compassion, has a story which is entwined with the sea also. It seems it was one of twins, and was thrown into the sea, where it stayed for many years:
"According to legend, in 721 AD. the pious monk Tokudo Shonin
discovered a large camphor tree in the mountain forests
near the village of Hase in the Nara region. He realized the trunk
of the tree was so large that it provided enough material for carving
two statues of the eleven-headed Kannon. The statue he
commissioned to be carved from the lower part of the truck
was enshrined in Hasedera Temple near Nara; the statue from the upper half
(actually the larger of the two) was thrown into the sea with a prayer that it
would reappear to save the people. Fifteen years later in 736
on the night of June 18, it washed ashore at Nagai Beach
on the Miura Peninsula not far from Kamakura,
sending out rays of light as it did. The statue was then brought to
Kamakura and a temple was constructed to honor it."
(from the story of Hasedera Kannon)
II
This Earthly Realm.
Because of reasons,
I am currently teaching nine courses at the university
Both undergraduate and postgraduate.
In one of the courses I had chosen to look at this Hokusai print, and my voice would waver just the tiniest bit, and I would have to stop speaking just for a moment
when I showed it.


It seems that every second of my week is occupied with something,
and I work long days, getting home at 7pm.
Needless to say, my home is chaos, but easter isnt far away....
During this time, I try to imagine
the Great Buddha sending me serenity
as the waves of chaos lap at its feet,
just as they are lapping at mine.

Our family company has made a generous donation to japan Relief
if you would also like to make one, big or small,
please go here.
The devastation there is beyond imagining.
Posted by fifi at 4:07 PM 5 comments: