we need to talk about Reg... 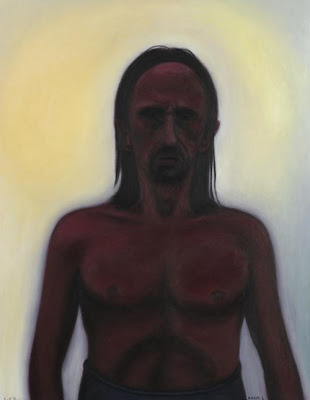 This is Reg Mombassa's "Self Portrait With High Pants",
which he submitted for that particularly Sydney slagfest, the Archibald Prize.
He thought that this would be close to "what Bon Scott would have done as a self portrait".
I rather like it. Actually, I like it lots. 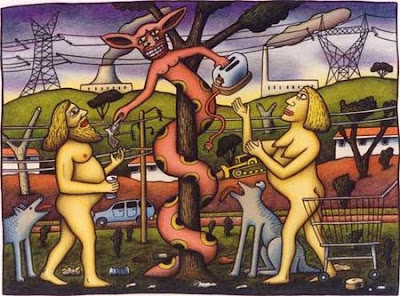 He is mostly known for his irreverent "larrikin" style graphics used by mambo designs. (His contribution to the Sydney Olympics was a fly-infested backyard bbq scene in the Closing ceremony: hilarious and bewildering).
Originally from New Zealand, he is a lovely painter who explores nostalgia and half remembered places, investigating the landscape from the perspective of the perpetual traveller.

and here he is with Dog Trumpet, playing "Lili Marlene." Monday night at NGArt in Chippendale.
Absolutely Brilliant.


This was the unexpected bonus for undertaking that military style operation called "going to an exhibition opening across town when you have small children and a densely tangled life."
Well, the boychild and I were amply rewarded.

Listen to the South Pacific guitar riffin' jangles. I defy ANY of you, if you are australian, to deny the presence of a few of those vibrato chords,deeply embedded in your psyche, those twangly guitar riffs, traces of any old "Mental as Anything" song played in a pub or an RSL club, or on the radio on a long car trip.

This was the best exhibition opening I ever went to.
Gosh it was fun...
( TWO doses of miss jane on the ONE day. AND her work was sold..go miss j.)

And the fishspawn had the best of all times too. 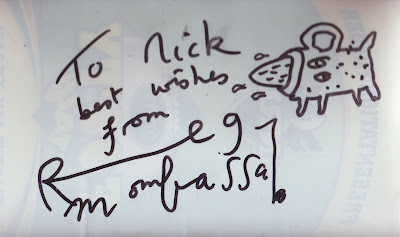 Go there: NGArt: "There's No Place Like Home" features artworks by Reg AND brother Chris O'Doherty, (not to mention the lovely Miss Jane.)
Little Queen St Chippendale.
Posted by fifi at 10:20 PM

ohhh i love that self portrait.

fifi, your blog rules! i keep wanting to comment but i type things out and they always sound rather oafish. but it's such an intriguing and addictive read. blog on, baby!

the you tube thing aint workin. sad, because I had to take me mum home just as they started playing. I just wanted to stay and dance. Check out tony j's blog for more pics. tony@eastsydneyacademyofart.com (sounds like fart at the end, heh heh)


McShauna, I don't think it would be possible for you to ever sound oafish no matter what.

Thanks for visiting...was actually thinking of you when I put up the music and now have publically humiliated myself by the fact it don't work.

I've heard this was a spesh night .... too fluey to go m'self ..... sadly. And reg n pete twang so good. Words are so aussie shakespeare. Love em.

Thanks fifi ...... and next time your in katoomba just insist that you have lunch in the old ballroom.

Reading this entry, I feel quite, well, dumb. I don't understand a word of it ... who this guy is ... what's a slagfest or the "larrikin" style ... and what are the vibrato chords of a South Pacific guitar?

Can I at least get partial credit since I'm about 10,000 miles away from you?

muse: yes it WAS spesh, you should have gone. I am so going to katoomba. I loved the images you made..


Ok, Arc,
The Archibald is a prtrait prize worth 35,000$A.
All the same artists generally paintt each other, themselves and a handful of faces like politicians. being a portrait prize, the work is generally a little predictable, same old same old. So everything gets slagged off(criticised) and the amusing thing is really who paints who. The sitter for this years portrait is my old painting lecturer and she was on the board of trustees for the prize till about 5 minutes ago...hence the topic of many slag-offs...

South pacific guitar vibrato..that kinda "hawaiian" ukulele style sound..it flavours the playing in this lip, and permeates their music way-bak when they were called "Mental as Anything"...

"Larrikinism" has been desribed as that aspect of the australian character by which all authority is resisted in a cheeky way, flaunting rules and not taking self seriously. A stereotype loved by australian cinema...

oh, just thought, Rise: you could try the website, Dog Trumpet, they might have some music clips, and also, please all excuse my TERRIBLE typing.