the fish on Sunday

The temperature has dropped, my feet are cold, and the patch of sun has shrunk now that the days are longer and the sun is higher.

I want to curl up in the corner, where it is warm, and put my toes in the sun.

It doesnt take long for the disagreements to grow, even at this hour of morning. Hiding among the clutter, I try and ignore it. I pick up a book and try to read, just for a minute, but the words are aimed at me.

Sporadic shouting, muttered words. Silence. I go upstairs and fold clothes. Have another sneezing attack from the layer of fine dust that has seepd into everything.


Going to the wardrobe I am unable to get in to put the clothes away for the second time this week. Shoes spill over the floor in piles, thrown haphazardly in a frenzied search for a pair. I counted forty pairs last time. My chest contracts in fury. I bend down and begin to pick them up. It seems there are hundreds and hundreds. It is impossible to stand on them, as they roll and shift beneath my feet. Some are hardly worn.


Crumpled on the floor next to the shoes is a Zegna suit which has fallen from the hanger. I pick it up, and try and push the other suits apart to put it away, but it is a hard job. Finally I cram it between Armani and Hugo Boss, and tell them all not to fight. The bar on which they hang is beginning to bend.

I think of yesterday, when I was downstairs looking for a book on my bookshelf, and found the way barred by three stern looking suits, like man-effigies, barring my way. They are hanging on my shelf, for goodness sake, and another on the door handle.

These three very arrogant suits are standing between myself and my art texts, which  says it all, really. I had wanted to throw them on the floor, but didnt dare.

I notice the suits have begin to creep over to my side of the wardrobe, shouldering their way across like bully boys. I note my own small row of shoes, my Russia Boots with their tops bent over  looking decidedly dusty and old.  I hurl the last of the pile of shoes in to place: the last boot I throw so hard at the back of the wardrobe that the cat comes scampering in to see what the noise is. There are still  eight pairs of shoes lined up along the staircase, waiting for their flight up here. None of them are mine. 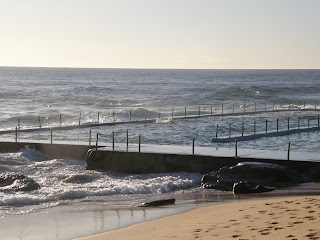 The wind having swung around to South west has swept away the warmer  waters that have lately arrived, and the sea temperature has plummeted again. The sea and the wnd fight tirelessly: yesterday the sea put on a mighty show, rising high and bending over in huge curls at the westerly. Today the wind has flattened the sea, which glares and shifts. I am still trying to iron out the knot in my stomach from the last of the arguments as I went out the door. The one which made me shout at the children

As I had stood shivering on the edge, an english man was climbing the steps as he passed and said to me,

"If you swam in the North Sea, you wouldnt think it cold."

I don't suppose I would, no. If I swam in the North Sea.

I dive in and the water burns me all over. It burns the top of my head.I swim for longer than I have since early July, it is so cold that the burning sensation keeps me warm. I feel all the dirt from my lungs, the dust in my head, leaving me in a cloud. The whole surface of my body is being scoured away. I swim and swim and swim, as my elbows lift they draw great swathes of windblown surf. Each kick sends up a tower of spray which arcs towards New Zealand. Below me are dark fragments of things which rock backwards and forwards as I pass above, pieces of rolling cunjevoi, swathes of darkness, the roots of kelp.

It is freezing. I pass through surfers in their wetsuits. I dive under.

After nearly half an hour, I take off my swimming cap. eyeing the sea carefully.

I'm not having you steal another hat, I say, and tuck it into my swimmers. There is a wave coming. 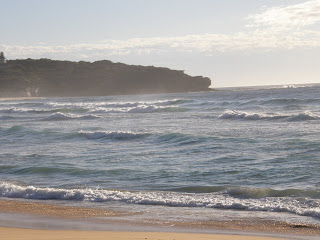 Just for a moment I rise above everything, then, face down and arms out in front, the waves takes me all the way in. I have no need of breathing or seeing, I am part of the water.

As my hands touch shore, the sea picks up all of my hair and pushes it into my eyes as best it can, knotting it around my face.

When I stand I have to fling it out, and make to walk up the sand, but something stops me.

I turn around, face back out to sea with the cold wind at my back, and begin to swim again, out to the horizon, like I am never coming back, but swimming forever,

I am swimming forever.

The waves rolling in from New Zealand are calling: “Kia ora. Swim a while, we know you well, you are welcome here. We often swim all this way just to say g’day, and to give our Aussie cousins the day off (Wave West Coast South Island said they were last seen somewhere in a pub outside Noosa).

We and our Aussie cousins have never told you this before – just once we’d love to join you as you step out of our world and onto your land just over there. To read a book, walk on toes, paint a picture, laugh, cry, breathe in and out. A glass of Australian red would go down well too. Our days often seem endless, the same old same old."

Take care, all will be well.

I'm glad there are no arrogant suits at my place! The mess here is of my own making.(well perhaps a little of of my chicks too)
Take care Fifi.x

I used to have those arrogant suits, jostling for more than their fair share. The shoes... not so much. There was a time when I had shoes!
I hope the cleansing sea washed away the irritations. Hugs XX

Read this years ago in the Australian Women's Weekly. New man left socks all over the house. New woman got the hammer out and nailed them to the floor. I had a leave the shirt under the bed type man once. I followed the sock lady and one morning all his shirts were still under the bed. He had to iron the cleanest dirty shirt. Never did it again.

Aww poor you. I have been in that wardrobe of course. I have no real idea why men need so many clothes as they look the flipping same whatever suit they put on.

I hope the clothes and shoes do not invade your space again. And that the arguments have ceased. Not the right way to start/spend a Sunday at all.

Wardrobe Wars. I remember those.