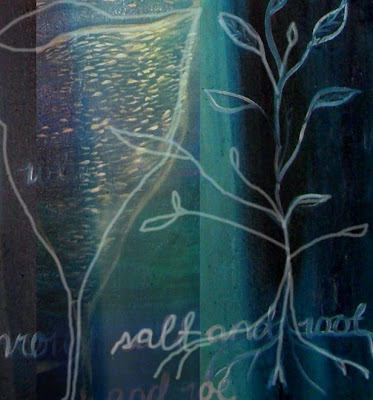 I knew the whale was there, ages before I saw it.

Jane won’t believe this, but it’s true.
A vast indigo shape humped speckled noise on the periphery of my sight.
I felt it, long before the boat arrived and nosed around.

I felt its vast bulk sliding by, far away. The waves from fanning flukes touched me on the face, all the way in the sandy shallows.


I spent most of Sunday underwater. I hadn’t meant to, just I swam a lazy mile and of course felt like playing just a bit longer so I decided to Turn The World for a bit.

Turning the world is a phenomenon where you are able to run, staring down at the sand with its meniscus of silver sea, and run run run and you are able to speed up the rotation of the earth with your feet. The world spins faster as you run!
I skimmed along the wet flat with the oblique sun shining on that luminous sandskin, turning the world for a while. This made my heart thump really hard and my cheeks burn and next thing I ran all the way in and found myself in the middle of a very angry fountain of sand: the sea was raking it up into clouds of brick red and lavender, scraping my skin and scalp, making such a racket of roar and hiss. Every other wave lapped down laden with creamy foam, then back to a spray of sand-filled fizz. Like a catalogue, a history of me. Wave by wave. 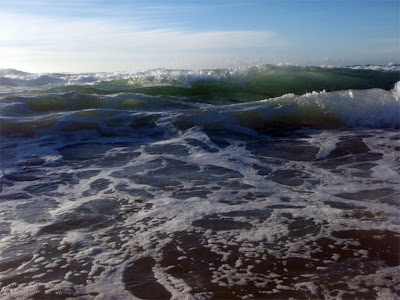 Here was a history of my life in waves: here the one that made my nose itch. The one that washed the grit off. the one that pinned me down, the one my dad carried me over, the one that seized my pink crocheted pants and carried them off. All the waves. All the times I spent , all mornings, all afternoons. 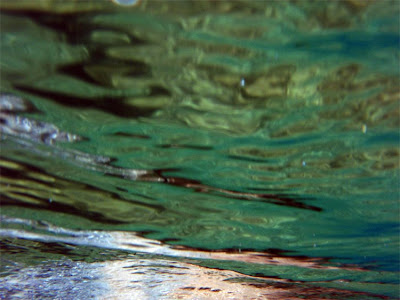 The history lesson was beginning to make my eyes sting. Out feet first to where it is hushed and quiet. Even the boys dancng with the sea make barely a hiss, and tis here I hear whale motion. Just a tiny spot out there. I began to wonder why I hadn’t seen any whales pass by, I mean, almost winter and here I am with hot salted nostrils and not a whaleplume in sight.

Here are garfish in clouds, needling their way to nowhere I know, their eyes in permanent surprise.
The sand whiting like to pretend that they are very nonchalant, but believe me, they are too stupid to even finish a sentence. Garfish at least pretend they have manners as they needle their way from one patch of blue to another with such serious intent.

My cheeks burning, and I will tell you a secret:

And that is,
I am afraid exhilarated terrified.
Don’t breathe a word, but I swim hard in fear or my life, for fear of cracking my bones clambering up the dark face afraid I will be held suspended at the top like a fat black salamander then thrown to the bottom and cracked open like a split skink. I dive myself through so hard that I am airborne for two metres. I hide on the bottom from the thunder. I hear things far away. The garfish circle me like a silver crown, but I flip and dart and plummet through the water with the arched back of the hysteric.


Eyes burning , cheeks pink, when I emerge black and shiny Jane is there.
I go back out to play together with jane for a while, she with her bones light as a bird and flowers disappearing here and there, smiling at bream and looking around with sky coloured eyes. Whale bone, bird bone , needlenosed garfish, Jane disappears in the lavender froth and comes up in the quiet spot, a fuschia dash in a dark green sea.

It is late in the afternoon. It is remarked that my eyes look so blue because they are so rimmed with red, the salt has burnt me, but still I am able, standing on the edge of the water, to see finally, the plume of the Southern Right Whale as it breaches in the deep. We all see it then.


I think about something that occurs to me quite often, the notion of faith, of belief in the unseeable. And the love we send out into the depths, in the faith it will be received, and having been received, swims on. 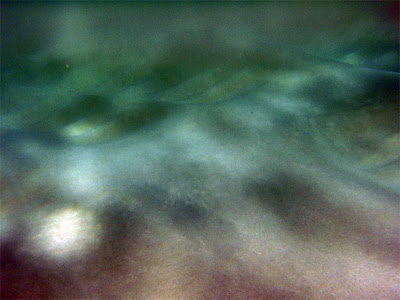 cliffs of the heart

here is a look into my charcoal universe, 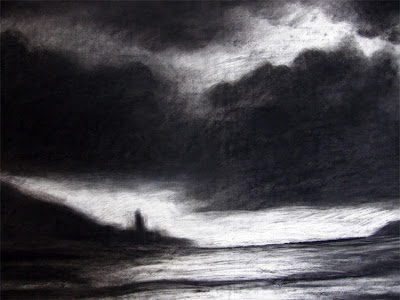 drawings which are becoming an animated installation.


As I draw i think with my fingers and my heart I listen to poems in my head I think of things far far away. 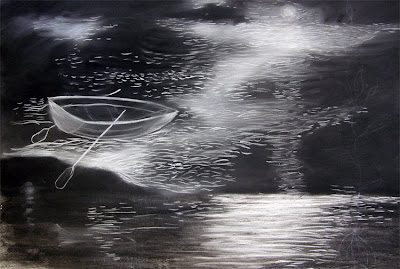 I am hearing rainer maria rilke, about things which can bloom on the cliffs of the heart. 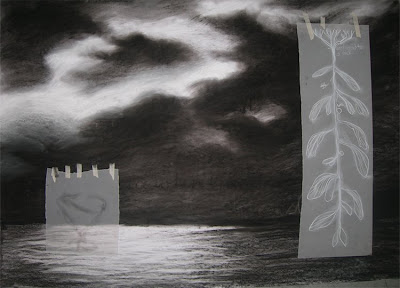 shadows clouds sky created with the residue of fire.

all drawings create the presence of the absent,

all this talk of flowers in the elsewhere lands has made me wistful for flowers.
So I went and found myself some hyacinths, pink ones even, here they are in the first light of day. 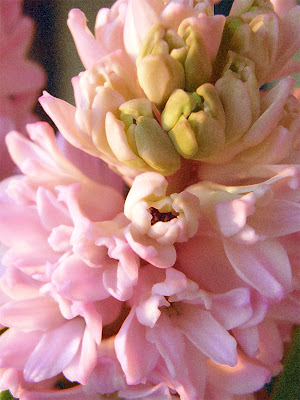 and some geraniums, just right for the seaside. 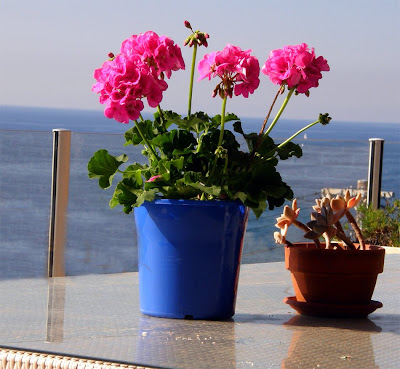 And a spectacular show of Lilies appeared on my table. 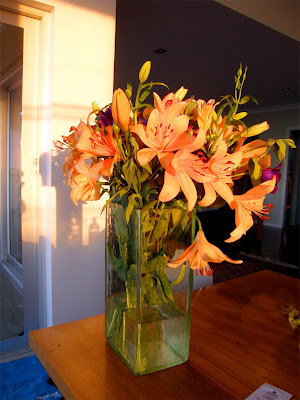 I photographed them all, then felt rather sheepish, when my dear Banksia tree revealed to me, on my way down the front path, that it had its own show of blooms shining in the sun. 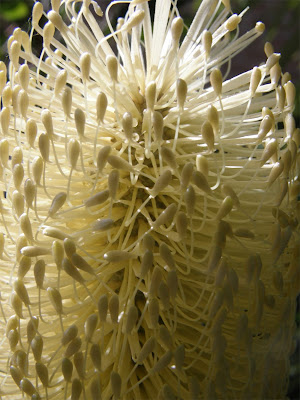 I felt mean that I had overlooked them.

But a houseful of flowers is a nice way of celebrating
Northern Spring in the Great Southern Land.
Posted by fifi at 8:46 PM 12 comments:

in which the fish receives a gift but knows better than saying thankyou. 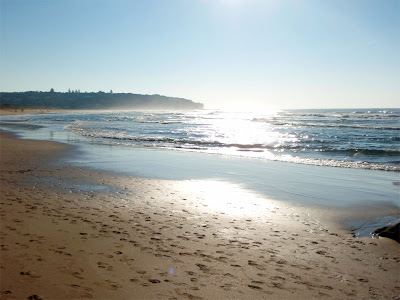 You have to keep an eye on that sea you know. In Autumn, when the saltwater is warm and the skies beautiful, it puts on an act of helplessness, of pretty little wavelets and sandbanks and golden light shining from every place. Surfing a wave over a sandbank, the sea still pulled my by the hair, like a beetroot being dragged by its stalk, and threw me in a hole.
Pfft. I say. Pull my hair as you wish, tis nothing, tis just hair. Have it if you must, I don't care, tis tangled and weedy. 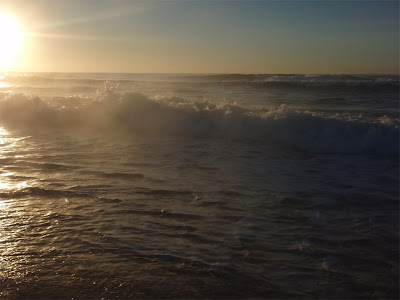 But in the night, the sea surges in an insidious burst, and scrabbles around when noone is looking. Takes the sand away, hunts in the furrows of the rocks. Picking and gouging, laying bare with barely a sigh, so silent and swollen. 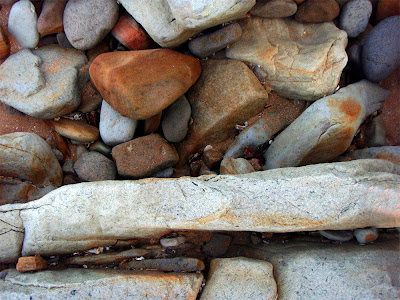 I look at this world revealed, and despite myself, I am impressed that so much is laid bare, and me not hearing a thing. All the stolen sand making sandbanks under the surface of the water, here the rocks are pale and naked, their veins blush and glow in the wide world here, woken so rudely. 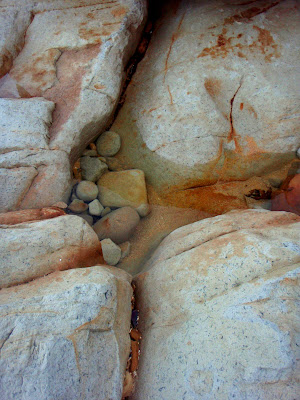 It will all have to come back, you know, I said quite simply in the dawn air. All that sand, eventually.

Not even the resting seagulls stirred, just the dainty shush shush of wavelets and the sigh of the autumn breath of the sea.

Next morning I was astounded to find that all was back in place, in only one single night, and only half a moon to help with such things,
Everything smoothed, all crevices covered,
and even a gift left there for me. 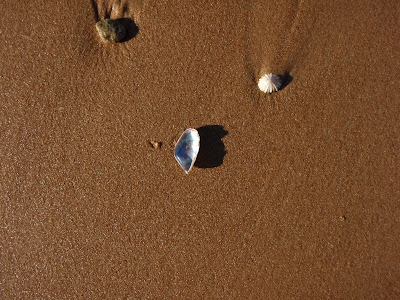 I made a pretense of thinking it was washed there by chance, complicit in this game I am.
Even though I know,
that the sea gave it to me.
To me. 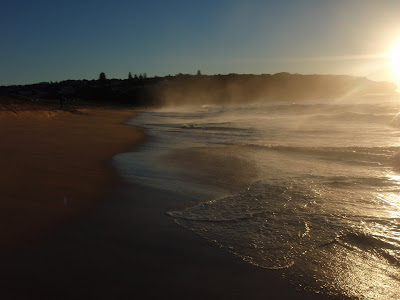 This is the breath of the warm warm sea, as it exhales upon a stretch of cold sand. I feel it breathing on my skin from where I am, the point at which one becomes the other:
Sand, sea.
Day, night.
Water, land.

I tried to smell the whiff of kelp that came calling, when I was nose-deep, but I found my chest so contracted I couldn't draw the smell into my body at all, no.

All I can say is that I am thankful indeed for sapphire blue, in which I am currently immersed, I am so glad for that. 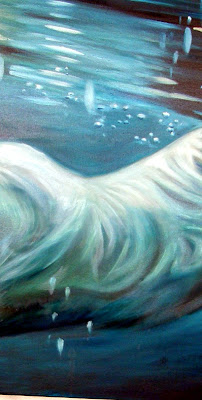 What dements me?
Let me tell you.
One thing among many, but the only one I'll tell today,

Being halfway towards a lovely load of work, and right on cue, the collective consciousness makes the same moves.
Specifically, Tim Winton and Bill Viola

So when the time comes, you, my blogfriends, will have to fill the gallery with your presence and let not a single person whisper the words,
"ooh, that reminds me of Tim Winton's Book Cover."

Anyway, I have much to do. I am completely immersed, the sapphire blue my saving grace, and I am going now, to dive into that wonderful hue, and paint all day, all day, all day, and fight off the longings in my heart.