in which the fish regards the blue, the brown and all the white 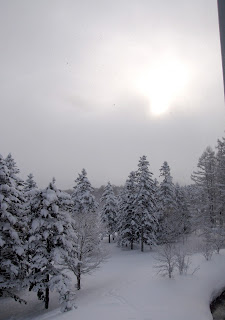 It is a long journey by sea, even for this fish.
This fish,
who, with a mighty and muscular sweep of the tail,
launches out into the open sea.
At this, the sea merely raises one salty brow and shrugs.
So be it.
Says the sea,
If you insist on spinning way beyond your normal trajectory, you will find what you wish.
So.
This fish
spins out past the known lands and grows and grows, spinning like a translucent thing through the vast depths where the sea becomes the darkest of greens, where the dried echoes of humpbacks still hang suspended like curtains of air, and heads north.
The sea is silent,  shrugging  a turquoise shoulder as the fish spins on, further, like a torpedo through a cloud of ribbon fish, as the waters warm. The sea speaks only once again:
You will see much that you like not, fish, but you will see also much that you love.
The fish finds itself in clouds of brown, where no brown should be, and the realms of land and water  become blurred. A crowd of frightened black and white cows, hoofs kicking, rolls their eyes as they float out a river delta. Chairs and boxes and shoes tumble through the clouds.
At one point the fish feels the salt disappar altogether and sees the buried matte of grass,  a field, fences.
Huge petals of soils spread out into the sea, where land and water do not seem to be able to tell each oter apart any longer and boundaries dissolve. Ribbon fish attempt to be civil to swimming cows, but the cows roll their eyes in terror.
The fish flees the silting of her gills and continues even further  north, through vast archipeligos,  past huge and friendly turtles and ever diminishing schools of other silver fish. The fish takes the shape now of some huge hybrid creature, with silvery scales the size of saucers, and long, thin, translucent teeth like those of a cat. The fish travels through brightly illumined azure waters of the equatorial seas, all the while heading north. All the while, spinning and dipping with great sweeps of the huge transparent tail, the fish swims so far, so far all the while, until the waters grow cold and dark again.
How to proceed, how to proceed,
laughs the sea to itself, as the fish considers its position and the iciness of the viridian depths into which it has arrived.
There are the Straights Of Korea to consider, and the murderous bays and troughs along the southern coast of Honshu:  perhaps this absurd fragment of fishbone,  foolishness and fish-meat will head into northerer waters.
face to face with vladivostok. Within sniffing distnace of Siberia...
And the fish considers this, because all the oceanic considerations are felt by the fish  deep in her fish bones, that skeletal leaf-frond detecting all the thoughts of the sea itself.
And the fish, despite having felt the mighty cold of Russia once before, nonetheless turns its pointed silver face northwards away from Honshu, and up towards Hokkaido.
And here is the most dangerous realm in all the sea
for any kind of fish.
Casting her large fish head to one side, she listens out for the mournful sounds of slaughtered cetaceans, and creeps to the north, away from this southernmost isle of japan, and slithers her bulk past the Sakharin islands, around the tip,
and into the
Sea of Japan.
Japan.... 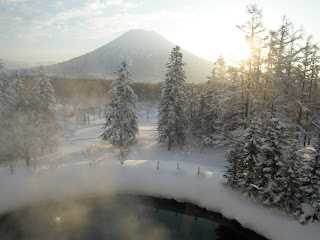