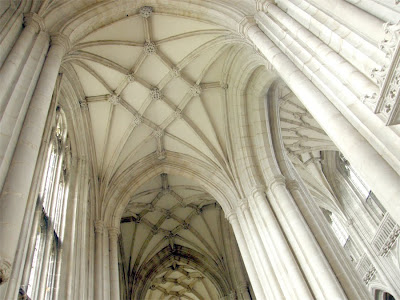 Wonderful things, English Gothic cathedrals. Way-stations to heaven.
The columns soar straight up to the beyond, until you can barely see them. The stone is pale, beautiful and lunimous, forests which reach up towards the distant starry rosettes on the canopy above. 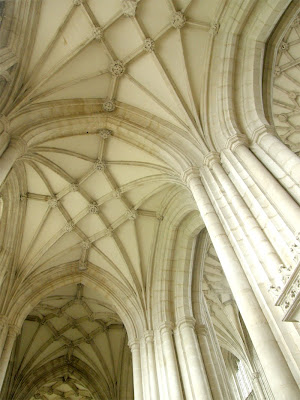 They crouch in the landscape, enormous creatures visible from afar, the bulk of their forms bolstered by an exoskeleton of buttressing.
I enter the stillness of Winchester Cathedral, and wait to feel whatever presence it chooses to reveal to me.
Today I sense the presence of absent choirboys, the images of whom are variously walking or wickedly running along, small legs poking from beneath volumes of white starched cloth and regal purple. Their voices hover in the air, heard only by those who imagine or remember, because it is summer and the choir is away in Salisbury, singing there. So many little choirboys, singing like angels and then let loose into a much harder world when they are grown. 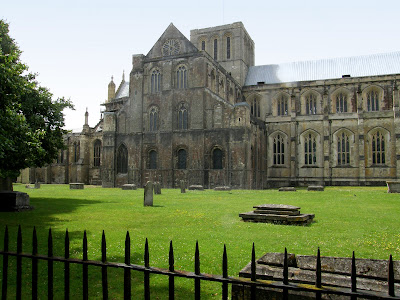 But who is this coming into the cathedral?
Buzzing and bumbling along the nave like small bees: schoolchildren visiting.
All the usual characters from a school group, the girl with the heels clacking on the old stone floor, the fair-haired boy standing a  little apart and running his finger along the edge of the carved wood. The rose cheeked girl, staying close to the teacher, the earnest and pale boy, listening with intent.
The lady endlessly polishing the wood of the carved choir seats looks up at their clamour, momentarily, her progess is astonishingly slow, like penitence. Luckily for her the choir is absent, as she takes so long to finish even one seat, and here she is pausing to look at the children. The children gather and flow, forming small dark noisy bunches, gathering and looking together, then breaking up and flowing on. 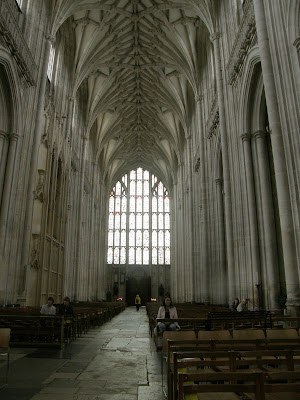 Peering closer,  I'm amused to read that these children are from The Stonehenge School.  Their little blazers and sweaters have an emblem of Stonehenge , with the name of the school in a cirle around it.  Wonderful!  The Winchester choristers have been exchanged for a flock of small druids.  I wish badly to photograph them, but remembering my days as the chaperone of small madelines in two straight lines,  know the teacher will rush forth at me hissing like an angry goose and chase me away if I point a camera at any of them.
The little druids chatter and look, tilting their heads to look at the roof. 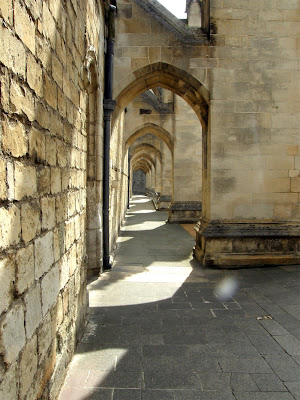 Among the many skills that I have known and forgotten is the knowing of every architectural feature of a Gothic church.  This particular skill dwells in a dusty basket somewhere in a cupboard in my head, along with the speaking of French, the playing of piano and the words to Jabberwocky, and I haven't located it or years.  The tumble of words, carefully learned and applied: lancet arch, flying buttress, nave, transept, ambulatory, cinquefoil. So hard to learn at school if you have never stepped into such a cathedral, and there was only St Mary's in the city, which was only Gothic revival anyway, and I never went there. I eventually went to Stonhenge and Salisbury Cathedral both,  and cried at the sight of each, because they were so wonderful, and around both lay snow which glowed a pale untraviolet light. Different of course if being inside one of these churches was a matter of course, and part of your life. It would be impossible not to sense the presence of the divine, or transcend beyond the day to day, connected as you are by that lux aeterna beaming trought the windows, or by the power of collective voices surging through you like a palpable force. 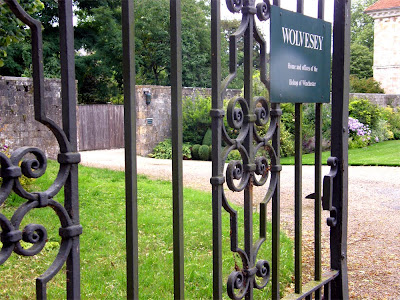 There was no snow outside Winchester cathedral, only impossibly green grass scattered with tiny and beautiful white flowers, like the ones you see in paintings, that Gothic carpet of tiny flowers, such as you might see in a Fra Angelico Annunciation. I had never seen such pretty grass.  I had not ever seen this flowery carpet come to life.
I was surprised to learn that the tiny little flowers were daisies. So small! Like little stars. 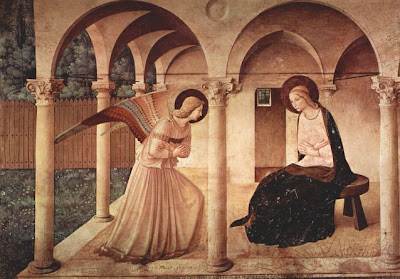 Winchester is a pretty place, where nothing seems to be too big or too small or too ugly. The light is even, the trees seem old and wise, boughing their heads gently. I wander past gates, fields of impossible green velvet. Children playing games on the grass, a sports track empty and quiet, no doubt remembering the runners flying around between the lines. That very fast little boy who flew the fastest. The ground remembers this, sitting silently, resting. 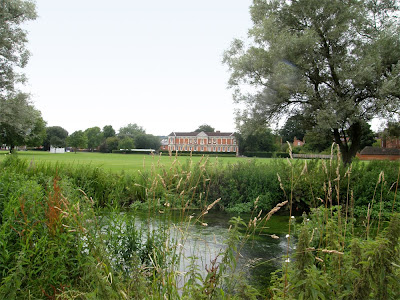 Later I walk back along cobbly streets. I imagine Jane Austen hurrying along ahead. It's not too hard to imagine, her image floats along somewhere,just out of sight as she heads off home. 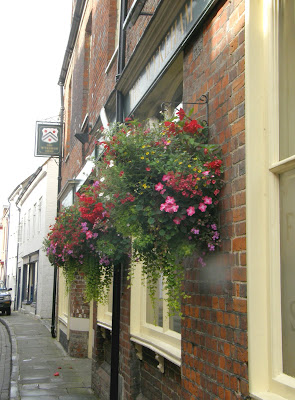 Evening.
They were sitting in the corner table, the last table to be filled. He took the chair against the wall, which was covered in framed pictures and objects and other little pieces of paraphernalia relating to every aspect of Winchester. The shiny surfaces of these picked up the candlelight.
She faced him. They had champagne waiting for them in an icebucket by the table. Gazing at each other.  They look completely happy. 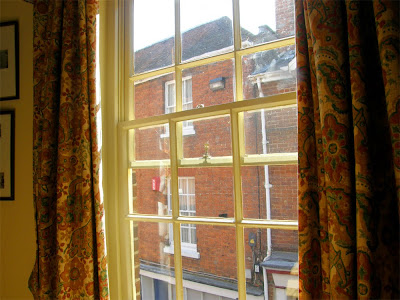 The waiter smiled at them. Clearly, he had been instructed to engage in some kind of friendly conversation with the guests. He was young and eager, and stood by their table, beaming down at them, like a trainee on a sitcom.
So, he beamed.
What room are you staying in? he asked.
Um, Nelson, they answered.
Ah! Lovely room! Four poster bed!
His cheery voice filled the small restaurant. Around me I could sense that at least half the other diners were listening, but in their polite British way were hiding it quite well.
Yes, they said cautiously. Lovely. It's very nice.
He continued cheerily.
What have you been doing this afternoon? 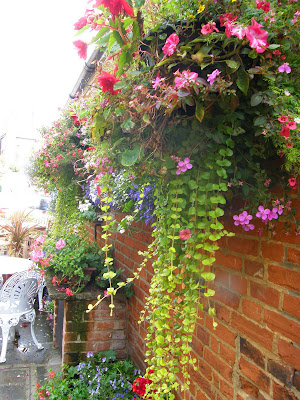 By the expresssions on their faces and their silence it was immediately evident to all but the waiter what they had been doing that afternoon. Perfectly obvious.
They looked at each other and back at him in horror, unable to reply.
He continued cheerily to chat about the food, and poured them some champagne. As he left them, they almost imploded with laughter and wonder.
She leaned forward,
Should we have told him? I was tempted.
The two of them disappeared into each others eyes. Each one of them lit up the other. 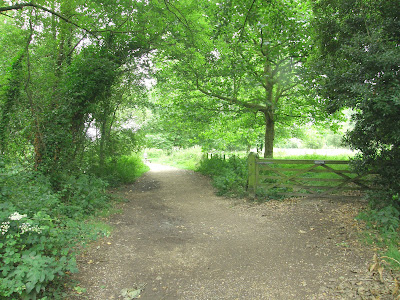 They were there next day, those two, walking by the watermeadow, down the track. He was showing her things, they were drifting along like nothing mattered in the whole wide world. The world around them was green and quiet, and clear waters converged.  I saw them standing on a wooden bridge looking dreamily into the water, holding hands, seeing noone, standing in each other's light. 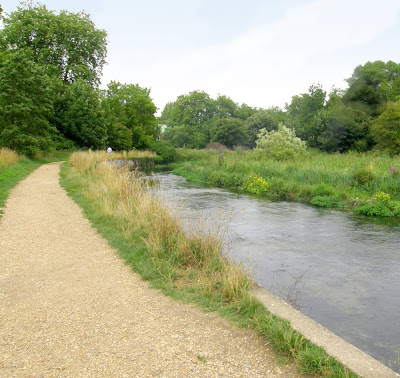 As I watched, something moved aross the path. It could have been a weasel, but was probably a dog.
Waving at me along the banks were big fat un-englishly prickly flower heads , which could have been thistles, but were actualy teasels. It was like falling into a chapter of Wind in the Willows, or Beatrix Potter.
In the stream below, darting from shadow to shadow among the long gently waving ribbons of green weed, were fish.
Hello fish, I said.
Hello fish, said they in voices only I could hear.
How do you like living in Winchester, fish? I asked them.
Winchester? they answered in puzzled riverish voices.
We live here. in the stream beneath the bridge where sometimes we hear angels singing. What water do you live in?
Big water, I told them. Big water far far away.
I left then,  back along the stream and into the town.
Far behind me two lovers crossed a bridge beneath which swam fish, quiet riverish fish who heard the angels singing, deep in their shadows, among the green weeds. I think of the sense of awe and majesty of the cathedral, and in the way of australians, find myself thinking, oh, we have nothing so ancient and magnificent. But then I correct myself, because there are places ancient and marvellous where one can sense the presence of otherness. 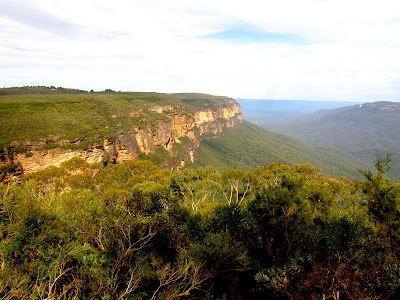 Sometimes you forget, momentarily.
Posted by fifi at 9:09 AM

I let myself float along in wonder at your words.

And gasped when I saw my mountains.

I thought of you, when I was writing this.

Thank you for taking me with you Fifi.

You have inspired me again to go and look at some of the things I take for granted here. Also loved that you didn't recognise daisies.

When I saw you were writing about Winchester I wondered immediately if you knew about the diver who saved the cathedral? http://en.wikipedia.org/wiki/William_Walker_(diver) I am impressed at your knowledge of flying buttresses but Wells is still my favourite cathedral. Beautiful photos and words always though.

I was i told all about him when I was in the church, and I have read a poem about him too.
The idea of diving beneath a cathedral into dark water is totally terrifying. Thanks for the link!

Wells is THE Cathedral from my art history text, and I have never been there! It looks impressive.
Next time.

For me visiting Sydney from Perth I found the Rocks area full of voices of the past and as I ran my hand along the banister of a set of steps that had been worn down from use I felt a connection with the past and imagined that this would be overwhelming in places overseas. When I was teaching on the outskirts of the desert there was a place called the granites with sacred caves and impossibly immense blue skies where you could sense the presence of otherness as you put it.
A great post as usual!

To see the cathedral beauty linked to the Blue Mountains makes the most perfect sense to me.

Of course it does.

What images of the divine, human and natural. And you didn’t forget the small – couples in love, talking fish, tiny flowers. Even Druids. Lovely.

Oh my, such wonderous sights for the eyes. The mountains take it - everytime.

This post is dreamy- I have read it about 60 times now and every time just let myself flyyyyy! I wonder if this post is actually legal since I get high with each reading...

Oh Fifi, you do get around, don't you?

I wonder if you're still in Britain. The weather's not so good now!

All you have described Fifi - the soaring heights in the Cathedral, the depth of the fishes, the breadth of our own ancient land...beautifully written. It is indeed a dreamy post of wonder and observation.

Fifi, I was here, reading, the other day, and went away, mute. Your writing robbed me of my words! There is so much here. Some of my experiences in England/Ireland were likewise. I couldn't write about them, because anything I said would have taken from the wonder of them by its inadequacy. So I hugged them to myself....I'm glad you are not so miserly and have shared all this with us with your magical words.

How very beautiful. All of it.

Thank You.
Isabelle, I am sadly no longer in Britain.

Thank you all for your very sweet comments.