in which the sea demands an explanation 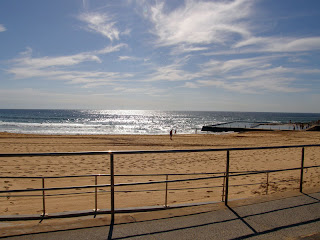 I dipped down, slithering out through the runnels under and under,  weaving my way seamlessly, out to the blue. It was the brightest, hardest, bluest part of the day, and part of me was chattering quietly about how I ought to have been and gone hours ago, and should have gone to the markets.

But the rest of me just let that thought go, and I stretched out my arm, tucked my face to my shoulder, and sailed through another wave beneath a surging plume of turquoise foam.

The sea surprised me then by speaking first. Quite directly, startling me with its sudden and unexpected voice, unheard for so long that I thought it lost.

Where have you been?

I stopped still. A cormorant flew low, almost directly above my head, as I rocked up and down. A fizz of salt burned my nose. I felt myself giving over to the utter sensuality of this, my eyelids dropping, my feet floating upwards.

I said to the sea,

Here and there. Around.

I felt the sea turn me this way and that. I put my head back and let my hair hang down, allowing this scrutiny.

Where have you been? said the sea.

You've not really been here.

Just last night, and the night before, I was here till the light bled from the sky, I answered.

And you know it.

I danced a mad dance in the lowtide push and pull, and you covered me with brick red sand as I danced so hard I could hardly breathe.

The sea remained silent then, waiting. Waiting for the right answer.

I have been places, and I have done things. I have been distracted. And I have not been out here.

and as I said this I did indeed realise that I had not been out into the deep, to think and dream, for quite some time. That my world seemed different. That I have been in far places, and that my dreams have washed me into different waters.

I have swum in an icy lake, beneath snow covered mountains,

where the water is as clear and green as the ice that feeds it,

I told the sea.

I know all these things,

All water is me.

I swam a bit then, heading north. I could see Charlie Taylor and the three Miss Bennets out on their boards, Charlie glancing over the waves to see who I was.  I dived down deep to say hello to the enormous crowd of snapper that had gathered far below me, but they all flicked their silver tails and fled: it is an error to approach Snapper from above in such a fashion. I had forgotten. I said hello to their disappearing forms, shadowy in the plumes of sand rising from the dappled sea floor.

Some things, I explained to the sea,

are just too big to talk about. You know that. I don't have to explain.

I still love you,

I told the sea.

which now held me suspended in a deep blue silence,

just the breaking of the waves further into shore, and began to swim in long strokes,

rolling with each stroke, pulling hard through the water till the bubbles flew in wispy illumined trails.

It was then I realised that the whole beach was one gigantic rip, and I wasn't moving except seawards. Charlie Taylor was a speck in the distance. My own son was around the next headland on his board with his friend, if I tried I could probably spot him from out here.

I took a long slow breath, and put my head down, carfully hiding my thoughts. The sea was holding on, quite firmly. I continued to swim north, so as to conceal the fact that I was being dragged eastwards. This was no usual rip, but one enormous, continuous surge, like an ongoing intake of breath. I maintained my lazy pace, my even stroke.

I could see the Taylor boy now, looking over, sitting on the Rescue board. The two older miss Bennets not far away, I could call them, and escape. But I don't. I turn over and backstroke, my hair hanging down, my body suspended.

See? I am not afraid. I can stay all day, forever if I choose. I will not flee, I will stay.

I dived down again, but there were no snapper in sight. Indeed, the ocean floor was so much further away. The sun sparkled on the water and the sea held on. A tiny helicopter passed overhead and three more cormorants so low I could see the downy feathers beneath their outstretched wings.

I swam. A piece of ribbon grass entwined itself into my hair. Some unknown fish flashed silver and disappeared. Dark blue swell lifted on the horizon.

the sea said nothing.

The dark blue swell picked up, and I began to swim hard, beating my feeet, pulling in long hard strokes, hearing the sigh as the wave picked up beneath me, tucking my head down, soaring. Soaring.

Until I am waist deep, then I stand, still feeling that firm strong pull heaving against my legs, coaxing me back. I am mere steps away from rejoining the world with its clatter and clamor and seasonal nonsense.

I turn around to face the horizon, and dive one more time in an arc beneath the waves.

Then I walk towrds the edge and up onto the slick wet sand, flinging my wet hair and feeling the sun on my feet.

I'm still here, always, I tell the sea before I climb the stairs. 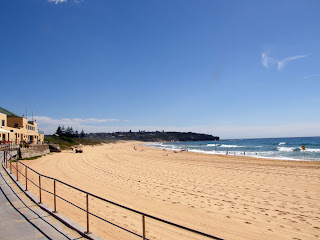 Wishing  everybody happiness, love and light, wherever they may be.

Six Months in a Leaky Boat: In which the Fush looks at Long White Clouds 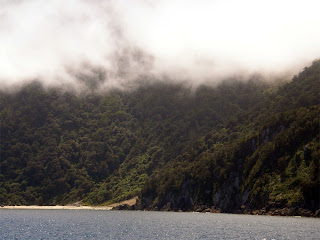 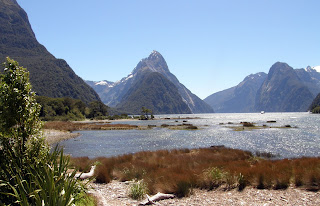 at the bottom of the world, 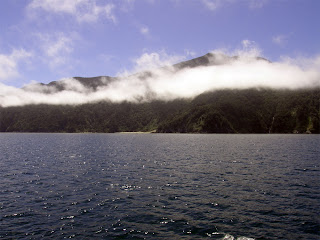 The tyranny of distance,

So why should it stop me?


I didn't mean to disappear:

Things surrounded me, and hid me away, but not the things one might think.

I have been reflecting on an  extraordinary year, which seems to be determined to show its wonders

right up to the last minute.

I was astounded to come face to face with him, chatting and completely back to normal.

In fact he challenged me to a breath-holding contest, in which I almost took part.

The year continues to be filled with surprises.