in which the fish struggles with words 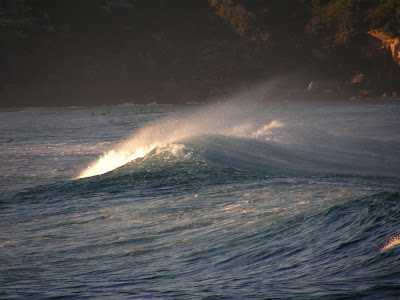 Since I seem to have become utterly devoid of ideas for blogposts I thought I would choose some random images and post them.
This winter seems to stretch onwards, and I am enjoying the consistency and exrtremeness of it. It rains and then it doesn't and then it rains, again. Amazing!
It is the coldest winter for a decade. I love it most of the time, except at work the heating is inadequate, and I often come home with tired shoulders from trying to be warm.

I love the light. So oblique and clear. The sea is so green and icelike. The sky hard and blue.


Here I am painting. Well, here are my charming feet encased in shoes so you cant see the finny bits. 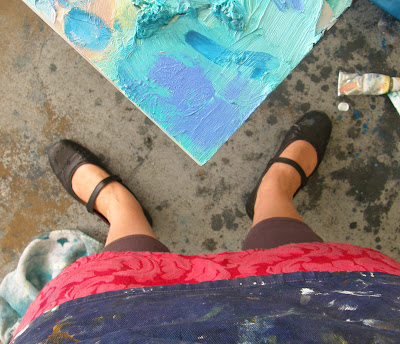 It was said this week that I had been seduced by turquoise and sapphire. This is true, and I am aware of this.
But I cannot attend to my charcoal practice at present, and will stay immersed in blue, even if PhD students feel that I have given myself over to a marketable force.

Tis true, but I feel safe in there, and that's the only place I do feel safe sometimes. 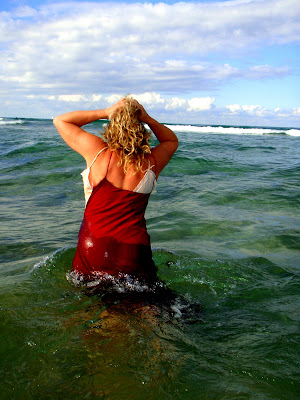 a quiet song in the rain-speckled sea 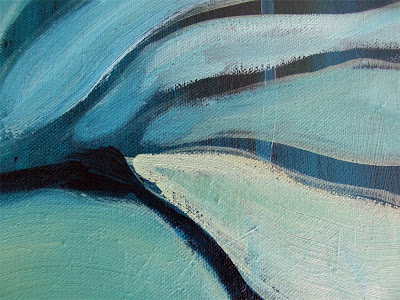 Sometimes babies leave the world before we think their time is done,
But that doesn’t mean that they are not with us still.

The love given them goes out into the world, regardless.

The songlines of this place here are whale songlines,
A person of this dreaming travelled all the way from the Great Australian Bight. Bunna Lawrie, of the Mirning people, came and sang to the little whale before it died.


My small song was but a whisper in the winter water , among the songlines of these creatures. There are many spirit whales for him to swim with, now and always. Out through the heads, past Barrenjoey, out to sea.


Somewhere, in the speckled indigo depths,
Is the shape of a small humpback, which will swim here forever, singing.


Singing softly always,
wait for me, wait for me.

I will always hear him:

the fish will sing a song for the baby 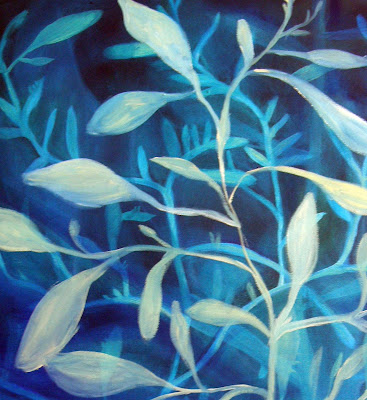 The little whale is too afraid and alone to stay in the open sea.

It is back in the shallow of Broken Bay, near my parents house. I can feel it moving around, so close.
I don't hold much hope and I can't sleep for the thought of its loneliness.

Tomorrow I will go there and it will not be alone.
Posted by fifi at 11:11 AM 13 comments: 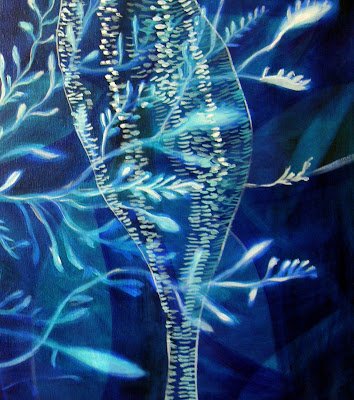 This morning there was a little lost baby whale in Refuge Bay in Pittwater.

It was only about one month old, and separated from its mother.
It was trying to suckle from the hull of a yacht before it was shepherded back out to sea, back to the deep.

It is calling for her now. I hope she hears. 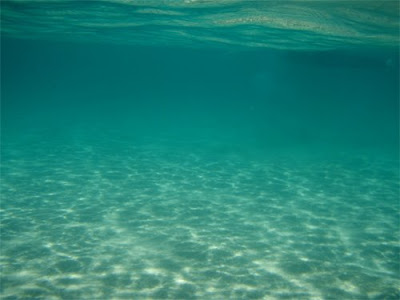 It is a ritual of sorts, a mark on an unseen calendar.

It doesn’t quite make it down to ten, but nearly.

In some kind of cold-induced psychosis I swim twice as far: from here to elsewhere.
The old blokes scratch their heads: you’re bloody nuts.

Then, just as I am all fired up to go, the ice age is over.
Still, I am still swimming to eternity. Born as a new fish, with far to go.

The world turns itself over: here is the start. The light is at its clearest, the icy stream has been and moved on. I’m singing of the ice in my veins, the light in my head, the prospect of a long song in a cold cold ocean.

Much happens, but I find myself somewhat mute. 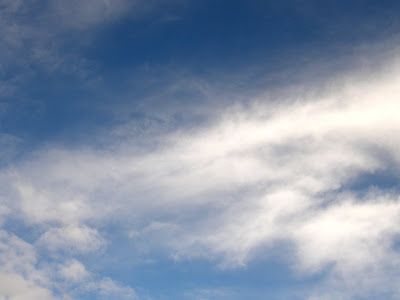 I am currently writing. Papers.
One on Wonder, and the other on the Sublime.
Finding it difficult, of course, as I always do. but crawling along with it. I do my best.


Just read what I wrote six weeks ago.
Darn good. Evidently, I was channelling Meli. Truly. She was as good as sitting here at my table, she was.

My methodology is erratic. Piles of notes, six notebooks, sticky notes. I took an hour to write one sentence, and looking at it the next day, I didn’t like it.


I can either get back to it right now, or I can go fold some clothes. People like their clothes folded, it’s a novelty around here.


Perhaps I will just look at the moon on the water, which will be a consideration of both wonderment AND the sublime.
The clothes can stay rumpled and strewn.
Posted by fifi at 8:40 PM 8 comments: 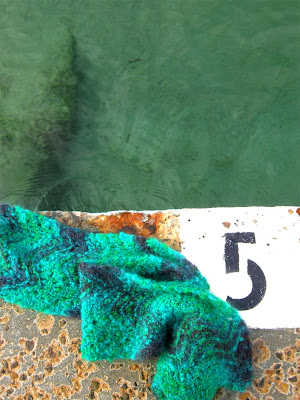 When the water temperature is less than 14 degrees, I am silenced by its cold grip on my neck.
This little rock pool sits in the chill wind, slowly freezing. The sea sits quietly, pretending to be disinterested, but I can see it being careful not to spill over the rock wall. The pool is like glass beside it.
It’s 12 degrees.

Unaccountably I am excited at the thought: I shall freeze.


Passing through the blue green underwater, drawing a blue arc as I do, there is no need to breathe or move. I am moving, yet I am still. Fifteen metres suspended.


Everything comes to life at once: I am here but not here: I am crossing icy straights I am under the arctic shelf I am a body of tiny branches fronds speeding through the blue green cold. I am dreaming. 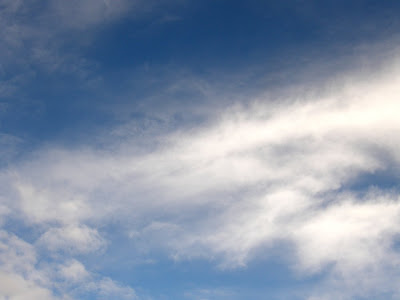 Despite that I am not numerical by nature, I know when I pass three hundred meters because I am able to feel, with my fish skin, the infinitesimal differences between here and there.
When I stop burning, when I am neither here nor there.

A rock cod lies, tilted and sand covered, which is what a rock cod normally does. Just lies in lazy fashion in the green ribbon grass, tilting with the tide, moving with the water. They look rather stupid, and I must confess that I share the general dislike of the rock cod: they don’t make themselves terribly likeable in looks or personality. Rolling around like that, all of them among the ribbon grass just on the other side of tis rock wall, where the sea is warmer than here in this frigid pond.

I fan my hand over it to get a bit of the sand off it and it flinches. Its dull spherical eye looks at me as it takes fright and swims aimlessly elsewhere to where I am. It must be the only fish I know to look stupid when swimming. Most of the other fish poke their noses up at it and I generally find myself making comments about old families and ancient lineage to certain goggle-eyed upstarts out there.
No respect, some fish.

Anyway, I say to the fish, no doubt some fisherman dropped you in here. Surely you’ve been around long enough not to fall for the old bait trick?
You stupid prickly old bugger I wanted to add

'It’s my birthday, rock cod' I told it

He looked about my vintage, very knocked about and patches missing off its head.
Actually, I noticed then it was a very ancient rock cod.

I know not what is a birthday.

'Time. A circle, some kind of celebration of my birth. Years.'

The rock cod spoke again:
is birthday like darknesses and the changing of green from bright to dark? The coming and going of the cloud of silver garfish? How many times I have heard the humpback ones singing their way north? For I have heard that many many times.

Time is an abstract, I thought. This rock cod and I may have heard the same number of whale chorus, and here we are in this cold water, both, prickly old buggers we two.

Over the next kilometre I saw it wafting about, looking for somewhere dark to sit and roll with the tide. Inexplicably I began to have the urge to slither over the rock wall and be amongst the ribbon weed. I climbed up on the edge, and across the cunjevoi. I must have had some rockcod dream in my head.

The sea was waiting. So warm, I swam with my hair in the waves, the riptide strong. It was warm in the sea.

I realised it was the sea all along, drawing me into it, Urging me to leave the cold and slither in among the ribbon grass.

The tide was tugging me. Below the rock cod were rolling to and fro half hidden. The green was wintergreen, their dull eyes looked into the grasses. Such a strong current today.

Friends called by. I would have joined them , but I know that even I can’t keep up with this lot. 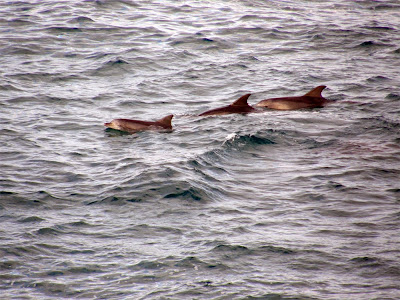 Later that night my favourite person friends came and cooked me steamboat and I was a very happy fish indeed.


Post script: do click on the last picture and look at the smile on the face on the left....
Posted by fifi at 7:55 AM 15 comments:

in which the fish looks at things with her hatchling 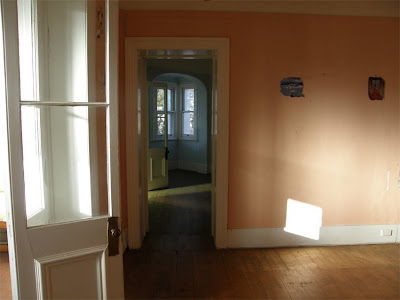 I take her by the arm.
I say: we are going out today.

To the other side of town: this here is part of my landscape, as you know. I show her tracks invisible to the naked eye. 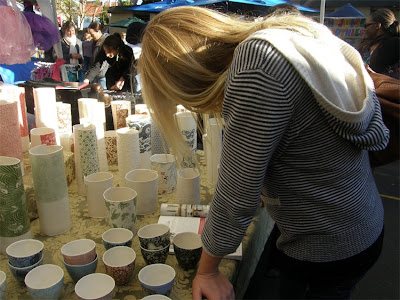 Here in this market, I tell her, I used to sell strange jewellery.
A kind of collision between Elizabethan miniature and the remains of a car smash: I was well known for them.
At the end of the day my eyes would be full of the fluff from the pods of the trees, which was sprinkling down as I told her this in the silver sunshine. Just like always.

It used to be more edgy then, I tell her. 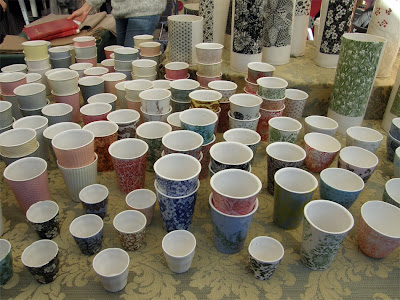 Then there was cockatoo Island: I thought I may have to defend the Biennale Artworks. This could be tiresome if so.
But it wasn't necessary, and I was surprised.
William Kentridge a favourite of hers, as it happens.
Despite the potential for the site to completely engage all thoughts, the works spoke intriguingly enough within them.

It was hard to emerge from a dark space in which one was immersed in an enactment of the 1984 Coal Riots in Northern England into the shining day here on Cockatoo Island. 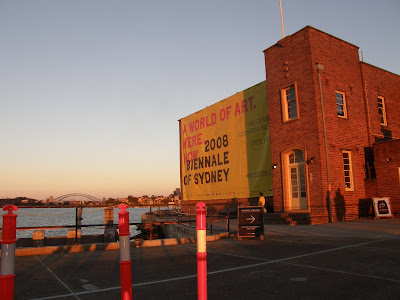 Soon I shall post at length about cockatoo island. Tomorrow I will paint and I will not think about anything but that. 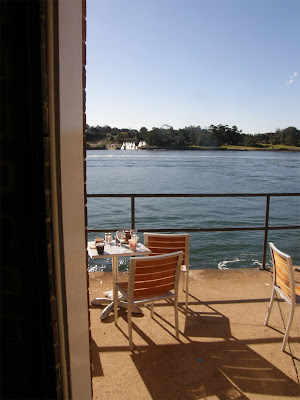