Memory in an Earthen shell 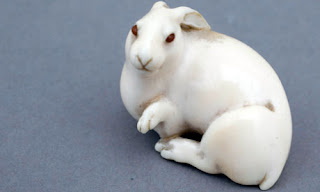 I know it was the Sydney Writers Festival, but as Edmund de Waal has repeatedly stated, he is ‘a potter who writes.’ So I arrived with the expectation that some conversation might be had about objects, their making and their presence. In some ways this was so, but I feel that any artists' dialogue was overtaken by a discussion of cultural history and religion. It was, however, a wonderful experience, as was reading his most recent book, The Hare with Amber Eyes, in which he traces the history of his family's ownership of the 264 Japanese netsuke of which he finds himself custodian.

I have long been fascinated by this man, the creator of such quiet forms, of  installations of  objects possessing a measure of silence almost defiant of their own materiality.  But it is their materiality which holds our gaze, and reveals these hidden connections and threads of memory. In his work, in the spaces reside both the silences of loss, and the notion of empty space as potentiality rather than nothingness. 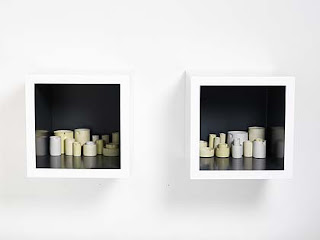 It has been said that the handmade holds memory in a stable shell.
The very tactility and presence of such objects and the way they demand to be held asserts a particular force within our increasingly screen based, un-present existence. This is what has prompted Edmund De Waal's great journey into his own family history: a sense of touch, of connecting, of feeling.
Of making visible the unseen through the material presence of the netsuke, holding them within the palm of his hand. It is the object itself which has made the connections for him. 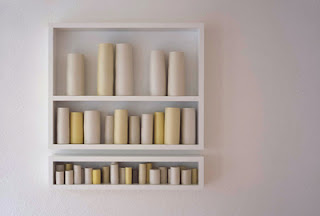 He appeared on stage at the Opera House before a packed house. In the middle of the stage was a small table, a cosy table lamp, a rug, two chairs.  The backdrop was black, but the speakers were flanked by the vermilion banners of the Sydney Writers' Festival, two bright vertical shapes bracketing the figures within the dark void. Edmund de Waal wore a dark grey suit, black shoes and a white shirt, so that he was almost invisible  against the darkness: just his luminous face and his hands caught the light. His face. A  vertical slash of white shirt. His hands.

And what hands they were: they were singularly the most extraordinary hands I may have ever seen. He sat, and shifted his long limbs in his seat in that self-deprecating English way, at times almost curling his back to the overwhelming sight of the audience, then  knock-kneed and sitting on his hands like a schoolboy.  He was of the most interesting proportion: elongated, lithe.  And his hands were just enormous. Made for surrounding and enveloping around the growing sides of a ceramic form. 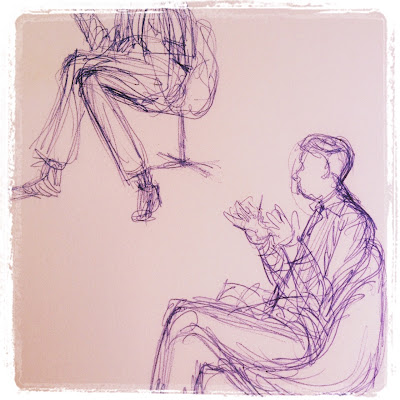 As he sat, and spoke so beautifully, his hands gestured like two rather large pale birds. His knees jutted out, his long spine curved over. And all I could  see was a man sitting throwing pots on the wheel, his long straight arms  firm and balanced, his face poised above, coaxing, with these  uncommonly large hands, forms of great beauty from wet earth. Regarding with a zen fixedness the appearance of a vessel. A shape. 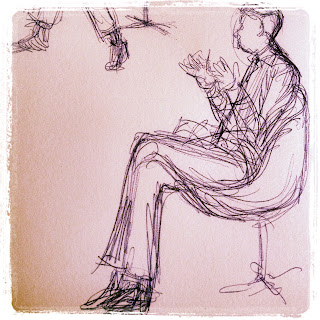 So I was,  somewhat disturbed by the way the discussion proceeded. Caroline Baum, competently leading the dialogue, seemed (to me) to be on the wrong track. I know that people will own a story, that they will receive it as if it has been written just for them.  A book will become the property of the reader, and once a text or a work has been released into the world it becomes, in a sense, an  audiences’ thing, to do with what they wish.  But I could not help thinking that Caroline, and the audience who were asking questions,  had missed the point.

But it should have been about things: the feel of them, the tactility, the making, the holding, the drawing out of formlessness to form. About fingers, palms. About the scent of wet earth, about sculpting and pinching and creating a thing. About the way the sensation of that object prompts feeling and thought. About the way history and memory will come to reside within.

De Waal answered this question beautifully,  saying his faith manifested in a  jewish-zen-quaker-protestant way….which is perfectly evident if you actually look at his work.  His work is peaceful, silent, contemplative. It exists, within the context of the  florid, almost baroque family history of which he writes as a pause,  a caesura,  an almost-absence.
An immaterial materiality, so to speak, a  pause in the concerto, a breath between arias.  The collections, the vast castles, the pattern, colour and gold of  the culture, experience and possessions of which he speaks and his family owned and lost is transcended by the purity and quiet of his own practice.

There was a point when Edmund de Waal lost his composure and commenced weeping. Naturally, I was compelled to weep along with him,  as he explained about finding that the records of his Viennese ancestors had literally been erased by some SS minion. It was this that undid him, and he had to curl his body into a shape which excluded the sight of hundreds of people watching on.  Tears poured from my eyes. 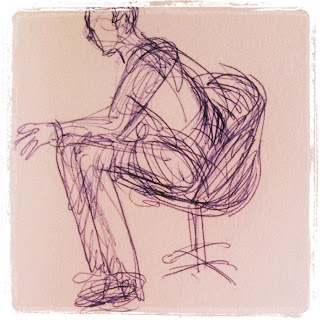 I had not been expecting this emotion, although I should have. Edmund de Waal spoke in such a kindly affirming way, despite his evident emotional fragility and his jet-lagged state.  I felt sad that this man had been separated from his clay, his wheel, his pots, his family, his house, yet  he continued to share his thoughts for an hour and a half with grace.

He left the stage and finally allowed himself to look at the audience, most of whom were standing, applauding. He paused for a millisecond, taking it in, raised his luminous hand, and suddenly waved, like a child getting on the  schoolbus, before being hustled through the darkened corridors to the signing table. It is this sudden, guileless waving which provides the punctum to the picture,  the thorn that pierces my heart. Still.

I joined the long, long line, and waited my turn, clutching my copy of his book, The Hare with Amber Eyes. Not The Pot Book, which I had considered bringing. I hadn’t actually brought it to be signed, but just to flick through on the ferry, and to look at the pictures, but I stood nonetheless on the end of the vast line of people, feeling like a groupie. Feeling that I was in fact utterly different to all the other people on the queue, when in fact I was not, all of us feeling that he had spoken particularly to each of us. A professorial kindness, politeness couched in a genuine sense of giving. 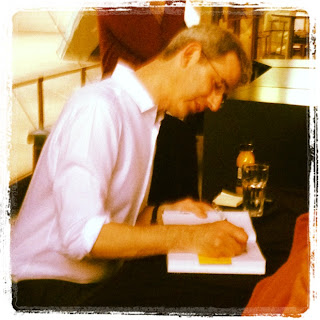 When It came my turn I was struck by the effort Edmund de Waal was making, in his tired and jet lagged state. I considered for a moment whether I could reach out and feel the tips of his fingers, but I straightened up, smiled, and handed him my book. Your hands...
I began
must be tired
He sat up, looked me in the eyes, and spoke.
Oh, yes, they are! Thank you  for coming, glad you enjoyed it.


And he smiled then, leaned forward, committing his entire body to the gesture
and using his great big hand, crossed out the printed version of his name in my book, and signed his own.

Later that night, after I had journeyed home in the late evening light, eaten my dinner and spoken to friends, I stood at the basin in the bathroom to wash my face for bed, and there on my face were black crusty tearmarks, fanned down my cheeks like the Nile Delta. So I wonder if Edmund de Waal wondered who the chimney sweep with the wild hair and blackened face was at the Sydney Opera House, proffering her book.
Posted by fifi at 12:17 PM 13 comments: