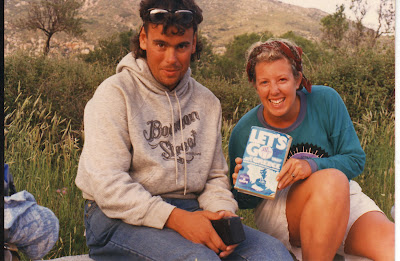 I lived in Greece for a bit, once. I was working there.
On weekends I would meet up with friends, for a weekend adventure somewhere on the island.
Parts of Greece are very remote, and what looks like a short distance can in actual fact be almost a day's travel,
so we liked to have races to see who could reach the destination first, in whatever way we could: bus or hitchiking.
As we were setting out one time, I spotted an unlikely looking bloke wandering around: an australian!
Ooh, I grabbed him very smartly, I hadnt seen one for months. He was just the type I would stick my nose up at back home, a real bogan, a yobbo. I seized him anyway and dragged him along: wanna be in a race?
Australians are generally up for that kind of thing, so he came along.
As we talked and hitched and stopped and waited, it transpired that he was "on compo" due to a football injury. He was using the money to travel.
His world itinerary resembled a spiderweb: Spain, Germany, New Orleans...backwards and forwards across the globe he went according to his fancy,Like Pin-the-tail on the donkey with a world map.
He carried a pack which weighed about 85 kilos. When I asked him what on earth was in it, he proceeded to empty it onto the ground: 12kg worth of loose change from every country he had visited. Six pair of shoes, including some for "good". Three leather jackets. Half a dozen thick, lurid paperbacks and a copy of "Let's GO" for each country.
That was just half of it.
We arrived at Moni Preveli first, a monastery atop a cliff.
It was from here that the systematic concealment of the Allies was conducted, in World War Two. Australians, Brits and New Zealanders wre hidden and later evacuated via submarine from this point. They climbed down this cliff in the dead of night to submarines waiting below.

In the bright glare of day, I struggled with the narrow, steep track. More than once I found myself shaking, and clinging to the sharp rocks beside the track, gazing at the sheer drop to the wine-dark Aegean below...
and all the while my little aussie mate bravely strode before me, beneath his 85 kg pack, and never complained once.
Geez its bloody hot, was all he said.
I suddenly saw him as some lonely,far-from-home 18 year old soldier, far from Coogee beach, creeping down this very track in the blackness so many years ago, and got all teary.

We all crashed out in the bushes at the bottom and slept overnight, like a pack of corpses. In the morning he jumped up, and slung his pack back on.
See yas, he said. Thanks for the fun.
We asked him where he could be possibly going, as he headed back up the cliff as we stared gobsmacked.
"The runnin' of the bulls, mate. Pamplona. Cant miss it",he shouted, and climbed back up the vertical cliff.

I never laid eyes on him again.
Cheers on Anzac Day, mate, wherever you are.
Posted by fifi at 9:17 PM

That sounded like one helluva day! You never know, maybe by some fluke of nature, he'll find this blog :) Life can be spooky like that! It's the people like that who truly stick to our heads, eh? :)

Wow. What an adventurous life. I have done nothing, in comparison. You should write a book! Thanks for your comment on my pontificating post - don't know what came over me!

Isabelle, yes, I have had an adventure, and its not over yet!
and your thoughts echo what I was thinking myself.
Great to hear from you!

Princess..I guess he crept into my head on Anzac Day, I would't be surprised if I tripped over him in the next week: stranger things have happened ....

I have almost been there & done that ... not to sound supercilious...
I have often loved people, encountered uexpectedly in odd situations. (this is not to say in 'the biblical sense')
They leave a lasting impression, & wonderment, of what-ever-became of....?