the fish at nine

For Isabelle, and her flowers 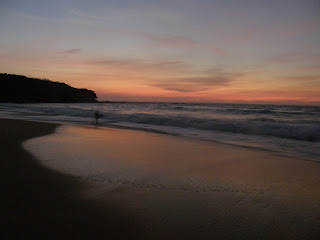 I lived in the beachside suburb of Merewether, in Newcastle. In a white timber house with a bay window and a typical coastal backyard with tough saltproof grass, and terrifying prickly pear over the fence. Lined up along the silvered wood of the paling fence were the white skeletons of coral and shells, collected over decades. When it was hot, the saltbush smelt like blackberry, and shells peered up from the sandy soil, no matter where you looked, there would always be one or two, even in the grass along the flat pathways to school. My mother used to pull snails off the daisies and drop them into a jar of salt to kill them: I remember having hysterics, and her laughing. I still think it is cruel and nasty.

My brother was younger, and I played with him when I emerged from my reading, but he was pliable and a bit too complicit. I bored with him easily, even though he was sweet enough. Sometimes we fought. One time we fought like the two cats of Kilkenny in public and my mother never recovered. Lots of hair pulling and slapping: she was so mortified I thought she would abandon us, but no, she was stuck with us.

My best friend was Lisa, who was pretty with green eyes and gleaming blond hair. She was very popular, and I was always amazed at her loyalty to me, so quiet and easily bewildered. Once I ran to the teacher to tell on someone who had dropped a paper at lunch, just so I could be rid of her and have Lisa to myself. My other favourite was Alice, who had large, pale blue dreamy eyes and long white plaits with ribbons, like a fairy person. She still looks like that.
Lisa married a very rich Italian lawyer. He was my landlord when I was at art school. Even later, her daughters turned up in my class at the posh school I worked at as an art teacher.


But me, at nine.
I was given a watch for my birthday, but I really think I could not tell the time, even then, because time was an abstract concept of which I had no grasp. Time meant nothing.

I loved Classical Mythology with a passion.
I preferred the Greek to the Roman, and my favourite was Persephone. Thanks to Volume 4 of Richards' Topical Encyclopedia, which I stole from my Grandma and still have, I actually believed the illustrations were photographs. They were, in fact black, and white reproductions of paintings by the likes of Ingres and Bougereau, and convinced me utterly of the truth behind these stories.

I loved my Derwent Pencils, their scent, their rich colours with names like Imperial Purple, Prussian Blue, Spring Green, Crimson Lake. I used them incessantly, going into raptures at the experience of using one freshly sharpened, or shading two colours together.


After school, I was only allowed to go to the beach if I was with with Lisa. Never alone. We used to go to the secret beach and find huge abalone shells, the likes of which I never see today. They looked so ugly from the outside, but their inner secret rainbows were so beautiful. I coveted the colossal shell that Lisa spied first one day, it would have covered my whole face. The biggest abalone I have found in recent times on my morning walk on the beach was almost the size of my ear, and usually they are much smaller.


Lisa and I used to swim in the ocean pool, silently, with only our eyes and nose above water level. We would noiselessly swim to the green net bags tied to the side by the fishermen and unpick the knots with our nimble fingers.
Out would swim whiting, bream and blackfish, freed from their bonds, and away we would all swim, fish and children, the silent liberators. We would and slip up and over into the surf, unseen, the fish would head for the safety of the dark shadows until the tide came up. The Merewether Baths are the largest ocean baths in the whole wide world.


At school they were strict with uniform and one day I wore pink underpants instead of regulation Navy Blue. I was ordered off the monkey bars, and had to play alone. At home I was always occupied with drawing, or books. I read endlessly, setting the stories in the coves along the beach with their towering darkness and sandy inlets: Ivan Southall, for example.
I went years later to that beach and was stupefied to note how small and low it seemed.


So, Isabelle, myself at nine?
Living in my imagination, swimming in the sea, collecting shells, setting free the fish, making up stories, drawing coloured pictures...
Sounds very much like...me! 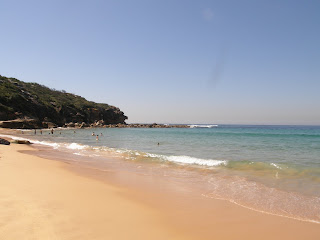 What a magnificent description. I have tried, but I can't remember this much! amazing.

Some children are born with a silver spoon. Others are born with a set of colored pencils, a great book about magical beings and, maybe, a pan set of Prang watercolors--brush included. Your home by the ocean with all the shells and the scents must have been a piece of paradise. An irrigation canal cannot even come close to a tide pool.

Ah coloured pencils - I loved them too, though I always coveted a big packet of 24, shading down through the spectrum. What I had was a selection of sharpened down ones in a pencil case.

Maybe if I'd had that full set I'd have been an artist like you? (No, I don't think that was the problem.)

Loved your post! Like you, I have no trouble remembering long ago. It's things like dentist's appointments tomorrow that I need to write on the back of my hand...

This is so beautiful and brings back my own vivid memories of when I was nine.

The girl who sat next to me in class had Derwent Cumberland pencils and, oh, how I covetted them! I never cared about the other girls' lovely shiny new shoes or plaits that stayed neat all day long, when I was a mess by 10am. But those pencils! sigh....

I have always thought that you should try not to lose sight of what you liked as a child because chances are you will find that they are much the same things you like as adult.

(Glad to see you back blogging as you were absent for a while.)

Thanks for a massage!!!! This article is awesome... really help to me,,, Paling Fence