In which the fish is abroad, part one: Tintoretto 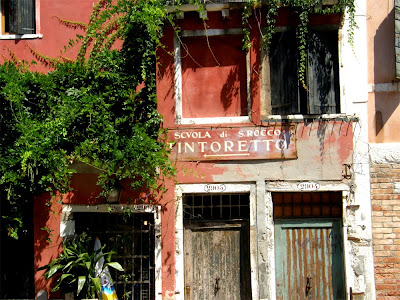 I first slid up against Mannerist painting not long after art school.

It was my almost-first job: two weeks at a Parochial Girls Convent school, teaching Art.  My first significant encounter with Catholicism, really, unless you count that mild schism between us white-sock wearing Girl Guides and that lot with the gross brown socks who had to go to mass  and never went to the beach. Not that this bothered me, my best buddy at guides was always banging off to mass: I just felt sorry for her.

Mass sounded so much worse than white-sockedy-Sunday-school. During a peculiarly pious phase aged about 11, I became completely obsessed with anything biblical, even though my inner feminist seemed to identify a problem with the virgin/whore polarity which seemed so evident. I also disliked being lectured to by earnest men, on things which I instinctively railed against.

At home, in a silent and deserted house with the late sun in stripes on my bedcovers, I excused myself for hiccupping., “ Excuse me Jesus,” I would say out loud, knowing full well there were better things to be getting on with in Heaven than listening to my hiccups, yet eminently sure that Jesus would have had time to excuse me.

I treasured my Bible Storybook, won for First in Religious Studies, and assumed that the illustrations in it were the equivalent of photographic evidence: every second page was a glossy colour illustration: Botticelli, Raphael, Fillippo Lippi, Fra Angelico. Georges de La Tour, Caravaggio. Massaccio. I didn’t know at the time these images would remain in my brain for evermore, but some of them seemed to leave darker traces. Whereas some were full of hope and light, others had a disturbing energy, a tenebristic darkness that seemed to chafe against my skin. Learning about Renaissance art at school almost led me to revisit them, but we stopped short at Michelangelo, and it wasn’t until my brief spell at the convent of the Good Samaritans that I came across them again.

Mannerism. In the manner of, a maniera. Tintoretto and Veronese, Pontormo and Bronzino, my very favourites, beloved now, but at that time, only known from my bible book.  A tipping point into emotion over reason, the balance and logic of the Renaissance slides into drama. I stayed up all night, reading, looking, writing. I made illustrated notes for the girls. I memorised names, paintings, dates.

The convent had that conventy smell, and the entire year ten sat there in rows, in green uniforms and brown socks. Not a word. Lessons were an hour long, and they had a double : they were silent, watching me, and I stood on the lectern at the front, thinking, Holy Shit, two hours on Mannerism and before last night I hadn’t known a thing about it. Three hours sleep and no breakfast. I handed out their sheets, which they looked at intently: they were artworks in themselves, and covered in detailed drawings and notes, quite beautiful. Then they all looked up at me, and I began. Tintoretto appeared on the screen behind me.

I barely remember what I said, but I do remember thinking how similar was the zeitgeist around me to the time in which these artists worked, the sense of an ending, of excess, of imbalance. Nights at strange underground haunts on Oxford Street, days which seemed strangely unnavigable, non negotiable, the sense of  impending storms, time hissing and crackling with the same electric spit as a Tintoretto painting. This strange atmosphere surfaces at odd times: winter evenings, quiet afternoons at university. The half hour before the southerly wind arrives, all mannerist moments.

I had almost forgotten about all this until I found myself standing inside the Scuola Di san Rocco in Venice, beneath a heaven-borne flood of Tintorettos. The whole soundtrack of it all seemed to return: the strange weird lighting, the noise of distant voices, the strange unbalanced running figures: Jacopo painting his way to forgiveness, to reconciliation, with the flicker of lightning in his ears. It was as if the entire sky contained images of darkness and flickering light. Overwhelming, the paintings seemed to possess scorchmarks as their shadows, so dark the tones, so sharp the white light. Sweat ran down my spine, in the unexpected Venetian heat. It was as if I was suddenly in some bruised and darkened Sistine Chapel.

Among all this, I found something, almost impossible in its corporeal loveliness, a girl flying through the sky. I marvel at her: the lovingly traced arms, the profile just hidden, the white clouds beneath her. Her red robes flying, the small white bow at her shoulder. When Tintoretto wasn't painting his soul into heaven, he found time for her. He lovingly outlined her strong shoulders, plaited her long hair and piled it on her head, made billowy her scarlet dress.

I love her. I think of her as I fly through clouds of sea foam. 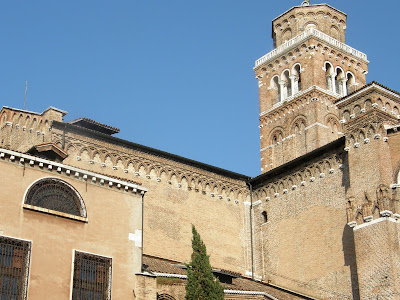 Later in the Church of the Frari, I become suspended in a space between the clear and soaring light of an English cathedral, and holding still my hand when it starts to make the sign of the cross in front of the alter.  Such is my life: later I found myself in another convent, one which sought me out, and I stayed with them a very very long time, amongst wonderful and spiritual women.  So long that my hand will still fly to my chest in certain places, will trace the sign of the cross, without me even knowing it, just from sheer habit, even though I have been gone from there for years now. It comes to me in this church, the way things do when one is far from home and open to such things. How strange, after all of this life I have had, to wonder in what kind of church I feel as if I actually belong? I think I belong wherever I wish to.

I am still thinking of Tintoretto in Venice back home now, on a warm winter day in Sydney. Outside, the waves come and go, and trails of light are left behind. I have to hug myself to conjure up the radiant warmth and light of Venice, close my eyes to reclaim the feeling of being enveloped in the atmosphere, held aloft, immersed. Of being entirely, completely, rapturously happy. If I close my eyes against the light, and stand just so, palm held up to the sun, I can feel it.  I can smell the briny whiff of it, the endless mumble of Italian words, the ceaseless motion of waves even on dry land.  Of the sun on red ochred palazzos, the gradual stilling of the water under the bridge as the night grew older, of throwing back my head. Happy and warm in body mind and soul. Of finding heaven, of a kind, with no entry requirements. Of being.

If I put my hands together quietly, the feeling might never go away. I will be Tntoretto’s flying girl, as long as I dream,

As long as I can. 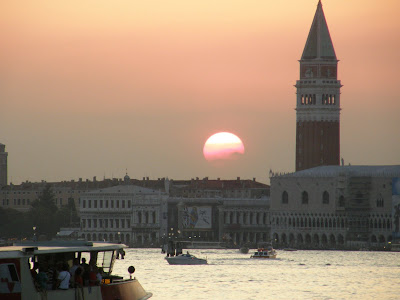 You are one of the best writers I know. You evoke such a response in me to what you write about.

And that last photo is sublime...

I am so very glad you are home.

*sigh*. I've just finished reading "The Gathering" by Anne Enright, and I've got a vague recollection that you recommended it. In any case, I love reading your blog, just as I loved reading that book. Thanks.

yay! you're back! The ocean seems warmer with you in it. ohhhhhhh...

And wow from me too. A very interesting and evocative post.

(I've just been to see Adelaide from Adelaide in her show.)

Don't ask me why in particular but the last two lines made me cry! I want to be that girl too!!!
What an interesting life you have had dear fish. I'm going to find a copy of that flying girl and create an alter to my own dreams for my future!

When I read your writing, I feel like I am right there.

The year of silent 2 hour art lessons gave me shivers.

Gorgeous writing.
It is painting in words.

I have never been to Italy---until tonight. Your words took me there. Thank you, it was lovely.