in which the fish goes to the art gallery again 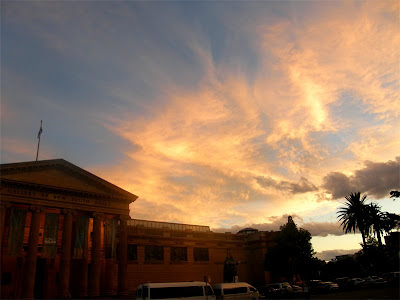 It's an awkward and ungainly building, really. It looks out over the green dip of The Domain, watching the skyline soar spectacularly ever upwards, watching the squadrons of bats rise from the Moreton Bays Figs in the evening light to seek their nocturnal places.
Its sandstone columns usher in countless children, variously clad in Bottle Green and Navy Blue, in legionnaire hats or straw boaters. Blazers. No Tie At All. 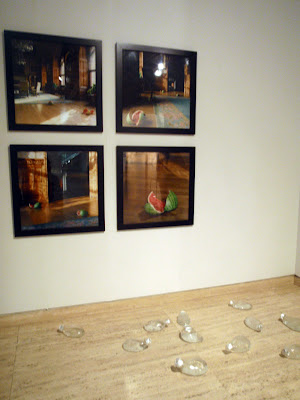 Christine Borland
The Velocity of Drops, 2008 AGNSW
It has changed shape over the years, though there are paintings which have not moved from their original place ,and I could find them blindfolded. There is a beautiful new wing at the back like a floating translucent cube, within which stone Buddhas smile in the calm diffused light. Small adjustments here and there.
As Art galleries go, it's nothing spectacular, but it's mine. I'll own it, though going to the National Gallery in London the first time caused me so much open mouthed amazement that I could barely look it in the face when I returned.
I have been coming here so long I m often greeted by the attendants. There is the same grumpy lady who watches me like a hawk,  the same thickly bespectacled man who like to tell me a story, and who I must avoid because I so hate to hurt his feelings by not wanting to hear them.
When I was about 15 I had my artistic epiphany here, at one of the Sydney Biennales.
I was on school excursion too. Clutching my notebook, I stared in complete wonder, captivated by my first experience of Art That Was Saying Something. There was a lot of installation work, and work by European contemporary artists, such as Gerhard Richter, Daniel Buren, Daniel Spoerri and the horrible Herman Nitsche. There was Arte Povera, Marina and Ulay, and the wonderful Rosalie Gascoigne.
Nitschs's Orgy and Mysteries Theatre was so dreadfully bloody and by all rights should have sent a little sappy airhead like me running from the room in tears, and yet I remember standing there marvelling at the sublime beauty within the gory imagery. 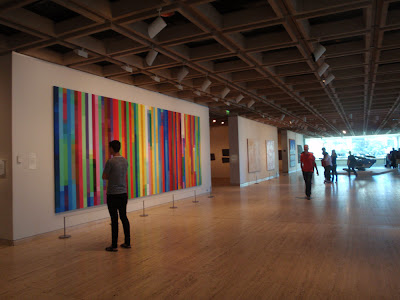 Art gallery of New South Wales.
I want to do this, I thought. Social commentary.
All well and good: I took that path, but it was a very long time before I discerned what on earth it was that I wanted to say.
I wrote no less than twelve pages of critique that day, continuing into the night, writing writing writing in my obsessively neat and pretty handwriting, about dead cows, beautiful veils of blood, the beauty of refuse. 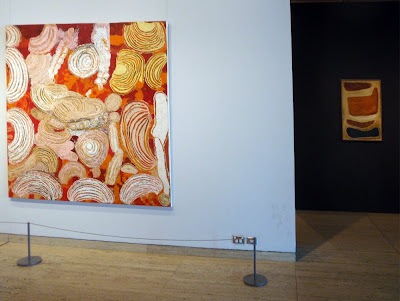 Balgo Hills/East Kimberley Painting
Desert painting: Lucy Napananka (?)
In my mid-twenties I chose it as my safe haven for a meeting: a place where I could have the upper hand.  Somewhere I could prove myself to be Not The Girl I Used to Be, but someone now very sophisticated and clever, just back from living in Europe.
Trouble was, I was the girl I had always been, I just didn't know that.
It was one of those pivotal moments where my life was swinging in the balance. We were both struck dumb from nerves, and, as usual, completely misunderstood the other, thanks to the defence systems we both immediately put into place. 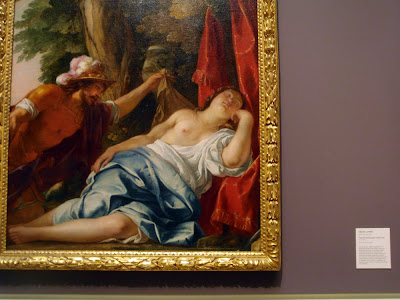 Jacques Blanchard
Mars and the vestal virgin
1638
AGNSW
So we lurched around awkwardly, waiting to hear words which were evidently stuck somewhere. I was paralysed by a sense of my own inadequacy, and he was mute as a result of my perceived indifference and his large ego.  It was a spectacular scene of misunderstanding, of uncovering old wounds, of wishing to impress but failing. The volume of nervous prattle which emerged was impressive.
It would be a very long time before I realised what he had meant to say.
We sat near the Glovers, with their twisty branches, and still the words evaporated.
I think at that moment I may have been forming a thought upon which I have acted ever since:
Life is short, never hold back. If you have something to say, you must say it, for you may never get the chance again.
We walked out of those doors and as a result, travelled as far as the earth could allow, until we were worlds apart. Until the next cosmic shift, in which we would again collide. As we do.
At this safe distance I look at this, and tell myself that this was a very good thing. Because look at me now, right? 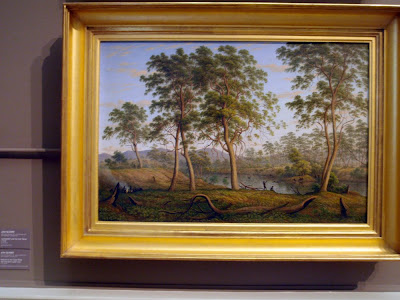 John Glover
Natives on the Ouse River, Van Diemen's Land 1838,
Art Gallery of New South Wales
But even now, I come here and can look at a whole room of paintings as if I have never seen them before. The paintings themselves never change in a material sense, but the meanings shift: the world around them changes, I change. For me they are different each time I look, and it's wonderful. I stand on the seat and bellow over the heads of my ninety art students, and wave my arms, and I am perfectly at home.
This gallery, I learnt fairly quickly, is very rarely the recipient of valuable pieces from overseas. If there is a show, there will be one or two significant works, and a bucketload of indifferent ones. Although there has been the odd  moment of glory:  I recently had the joy of revisiting someone who I had fallen in love with when they visited Sydney many years ago, when I visited her home in St Petersburg. 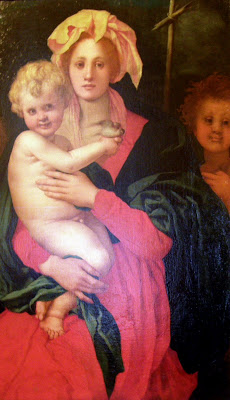 Jacopo Pontormo
Holy family With St John, 1524
The Hermitage, St Petersburg
Not so long ago I found myself at theGallery, looking at a show which was, as I had predicted, filled with rather uninspiring works, the collection of an American Museum which had kindly lent them out. The paint surface of all the Monets seemed strangely crusty and inert, the colours strange, the Renoir fake.
So I looked at things, and wondered vaguely, that even though I had known this would be so,
what was really going on.
I looked at persons in the room, more than once. I looked at them looking.
I looked at one person in particular.
We went outside, just as the rain had cleared,  the sun appearing for a moment, and I felt filled with light.
We walked down the sandstone steps and into the late afternoon.
Later on it began to pour, but I was perfectly happy. 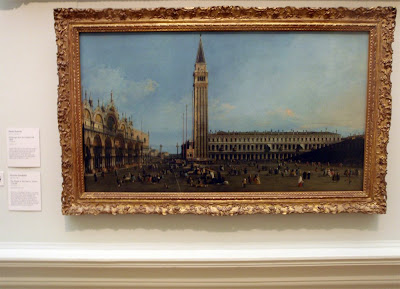 Ooh, I want to live in a gallery. Those Barragan houses, one of them would do. Lovely photo-essay, Fifi.

I like to look at people looking, too. Was quite a way away in the room when my youngest daughter saw her first Van Gogh 'starry night' picture here - it was lovely to watch her take it in.

It is interesting how art and literature stay the same but mean such different things depending on where you are in your own life. Thanks for the glimpse of "your" gallery. I have to travel a good distance to see actual original artwork.

Beautiful story. I didn't grow up with much art, so the galleries of Italy, Paris, and London were a revelation to me. I went to the AGNSW for the first time only recently, but I liked it. It is what it is.

Thanks so much for having us the other day. We all had a fab day. You are very gorgeous, you know!

Thanks so much for the journey.In my young back-packing days I loved art so much I chased it around the world, for example Rodin's "The Thinker" was not in Paris along with his other works I admired there, so off to the U.S.A. to Philadelphia to find it!I'd worked and saved like crazy for that trip, particularly to see the Mona Lisa...art is such a wonderful companion to have throughout life. I enjoyed your post.

What a lovely journey I travel with you , Fifi. I love these words "Life is short, never hold back. If you have something to say, you must say it, for you may never get the chance again." and have actually added them to may daily (handwritten!) Journal in my 'words to live by' pages. Thank you

When I first visited London I went to the National Gallery every other week and now I realise I haven't been there for at least a year. Time to remedy this. Lovely post.

Isn't it a lovely discovery, when we grow old enough and wise enough, to realize that we don't need to leave the Girl We Used To Be behind and become "sophisticated." That the GWUTB is the only girl we were ever meant to be! You are one of the lucky ones Fifi, who found out in time what she was meant to do.....and did it.

I don't know what I've been doing but I keep leaving comments that just don't want to stick! The last one was terribly witty of course and would have had you in stitches!
-Really it was just something along the line of the paragraph containing this
he was mute as a result of my perceived indifference and his large ego
Actually amused me greatly!

I used to take my children to the Art Gallery in Christchurch, often. I would watch them studying the paintings, & see their kindled interest.
You were young, but your wisdom had very good foundations.