in which the fish accounts for speaking up 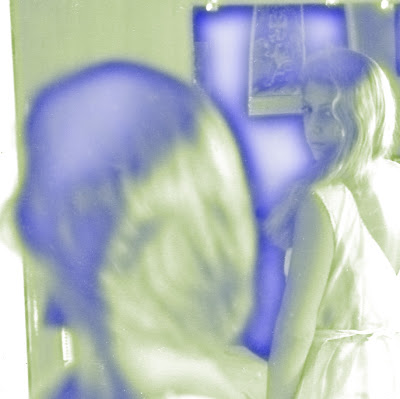 I didn’t realise until the last minute, on the way home, that he was taking me to meet his mother.
It had already been a day of small humiliations, the kind that arise from the fact of being so entirely in love with someone that any slip-up causes the enormous fear of rejection. And it hadn’t been so long, either, and I had been out of my depth all day, worrying about how I looked, and looking at him out of the corner of my eye. Still at a loss as to what he saw in me, really, because , quite honestly, he was the most beautiful creature that ever walked the earth. That’s a fact I still maintain as a truth: he was. I felt like such a peahen beside him.

He hadn’t said anything, he just turned into the gate of a small modest house. I followed him up the path, and onto the porch, where he opened the screen door and disappeared inside. I heard him call his mother, and felt sudden sharp waves of self consciousness numb my face. I stopped, paralysed.
I don’t think he noticed I hadn’t followed him in.

He had disappeared into the darkness, and when I hesitated, I lost him. I didn’t know whether to open up the door and go in, to look around in unknown corridors, walk into a strange bedroom by mistake, or even worse, an unknown bathroom.
He didn’t come back out to fetch me, so I stood there, realising how rude this must look. My heart cracked and thumped, and stole my voice away with its hammering. Minutes passed. My face prickled and I stared down at the ground, with no way I could go in now, it would look too awkward, and by now he would be angry, or embarrassed. Perhaps he had told her I was coming, and now I had refused to enter the house.

I waited woefully on the porch until he reemerged, unable to speak. I was like that, sometimes. As a child I was quite shy, and hated speaking in public. In class I shuffled and whispered when it was time to give my speech. But this was far worse: I wasn’t a child, and I had humiliated myself in front of the one I wished to impress the most, and was left completely mute by the experience. I couldn’t have cared less had it been anyone else.
We walked out the gate. It was some time before my voice returned.


She never liked me much, his mum. I tried for years to make her like me. Years later, I asked him why she didn’t.
He reminded me of the summer holiday we had joined his family, in a beach house, of the night we had been overtaken by passion on the sofa and had rolled off onto the floor.
His mother had wandered in to see what the noise was, and he had looked into her startled face over my shoulder. I was completely oblivious.
“She made a little squeaking noise when she saw your bare bottom” he explained, helpfully.
Naturally, I was mortified. Thank God I hadn’t known at the time.

It may not have been my most humiliating moment, that paralysis on the porch, but it’s the only memory I have, of being speechless with embarrassment, that actually still bothers me. It still makes the shame flare up in my cheeks: I was just so self-conscious then. That afternoon retains the power to make me feel shamed, but has informed the way I have conducted myself ever since.


I’ve not really been in my current job that long, this will be my fourth year: most people my age have spent lifetimes writing and researching and lecturing, and have much more fancy curriculum vitae than me. But it’s what I wanted to do, and where I wanted to be, despite the fact that I have lost a decade, and am so far behind. So when good things happen, which is rare, I celebrate them with myself. Nobody knows the dramas I have to go through to do anything, the fighting for time and the endless stepping around the huge domestic elephants that sit in my house, the late hours I spend at my books, the research that gets tossed aside due to some unannounced activity, or a blown-up car, or whatever hundred and one obstacles are placed in my path as I struggle to do things. If I am successful, I have had to work twice as hard as anyone else for the success.
I cannot say any of this, of course. I just have to get ON with it. So when it comes together, I am wildly pleased.


Last week when I spoke at the conference, I knew I would present well: I always do.
I just hate the lack of thorough preparation that circumstances present, or the thought that I have not done my best.
It’s a point of honour, you see, a vow I made to myself, a long time ago, that no matter what, I would never be mute again. I would always speak up and never be silenced, not ever.

And so, as always, there were two persons in that lecture theatre who always come when I am speaking. That blond girl in the front row, with the smiling, unlined face, that girl on the cliffedge of a serious daydream, but listening now, to my every word. I suspect she doesn’t recognise me.
How can you DO that? She asks, and I tell her,
it’s just practice, it’s just breathing.
She has no idea how sweet and hopeful she looks, with her shiny hair and untroubled face. No idea, silly thing.

The other sits closer to the back, smiling that smile, the one he tries to suppress, but can’t. He was the most beautiful boy in the world, once, long ago. He’s still pretty gorgeous.
Look at you, he says, Look at you.
He certainly remembers that fair haired girl in the front row, even though she can’t see him, up the back in the dark: she’s busily squinting at me, with her head to one side.

And that young me in the front row? She disappears too, selfconsciously standing now, shaking back her bright hair, moving towards the door, already becoming taller, thinking, dreaming, looking out for her beautiful boy, who is surely waiting for her just outside, holding out his arm, to go together somewhere, finding her voice, speaking up.
Softly at first, then a little more boldly, bit by bit, as best she can.
After a moment, when they are gone, the sound returns,  the chair is fielding questions, and I am back in the moment, answering them.

you know, I'm a teensy bit in love with you...in a perfectly good, non-stalkerly kind of way

also, you're not ten years too late, you're just not

Dear Fifi,
The loss was hers. Oh yes.
I have been there - that moment when you meet your son's girlfriend - and it was the source of so much joy and laughter.

The word verification I had to type in to make this comment was OVELOG which reads a little like love log. I'm with thirdcat. Love you, love your blog.

Hi fifi, just popped in from Bene's blog to say hello.
What a bittersweet post. But so well written. And a decade isn't so much at all.

you have as you always do, mannaged to express so well things that we can connect to, I was right there on that doorstep feeling awkward and mute, I cringed physically recalling in this moment all the times that I felt that way and sadly not in the so distant past!

Great photo too by the way!

I'm so glad you have found your voice, in all senses of the expression. Because OH what a voice it is :-)

I'm glad you found your voice too.

Another one of my joyful moments was finding your blog.

Bless you all very nice persons.
3rdcat, I deleted a comment at your place, then a wrote different one. the first one sort of said what you just said, so that's kinda funny.
but thanks.
miss jane,
i love you too and to prove it I am bringing four hundred of my closest friends to your show tomorrow night.
Alice, it was indeed.
Hello fusion, nice to see you. No, sometimes a decade seems like a week.
Thanks Hen, I think we have all had those moments. That one just never left me.
Thank you also Jelly, that's very nice to hear.

Mary,
and me yours.

Oh Ms Fish that fine thing you do with words, I have tears, and my inner farmer's wife has been clambered upon by my inner teenager who is grateful for the air.

this is my first,
but definitely not my last visit.
that was so achingly splendid,
and so beautiful to read.

First of all I'm wondering what a peahen must look like....then I'm just asking if you aren't SO GLAD to be older now!

It's so nice that the younger you is there, in the front row! Even if she doesn't know she's looking at her future.....And lucky that you can remember so clearly what it felt like to be her....I wish I could time travel, and go be a fly on the wall in my sixth grade classroom, the better to understand who I used to be before I became who I am.
Love how you put this all together!

That was awesome. I too had to learn to speak up.

Lovely lovely lovely. But a bit sad. Well done, you. You're so multi-talented.

Thanks for calling projectivist...I 'll be over to look at your site soon.

Handmaiden, you do speak up now, don't you? Quite well I gather.

Thanks Molly. I don't think I'd go back to sixth grade...I think there are better times to visit. I just had my head in a book in sixth grade. Permanently.

I do read your entries, Fifi, but I never quite know what to say because they are so full and complete and sublime, and anything I try to say just sounds silly or superfluous.

I know you do, reg, You don't have to comment!

Oh this was a truly beautiful piece.

Strangely appropriate for me too. Sometimes I seem to lose my voice - even now - and yet mostly I am bold and brave.

How I behave is so closely related to how comfortable I feel in a given situation and yet I can never really say what it is that makes a situation right or not right - it's nothing concrete.

Ten years isn't so long and you have already caught up! I'm still trying to find my voice...

this is such a beautiful post that i didn't know what to say. speaking (or not) is close to my heart, and i am a trifle envious that you have found a way to do it so seemingly effortlessly! (the speaking out loud bit, i mean.) but it is also - dare i say it - comforting to realise that many people have problems with speaking in some form or another, that need to be overcome, no matter how effortless it looks!

oh, and did i hear you say you weren't a writer? you should know better.