Here is a grevillea, a native plant in my front yard.
All the plants in my garden are native, except for the olives.
I love Grevilleas because they are "other", in the sense of being a plant which is other than a traditional european plant: strange-shaped and alien. They belong in this sandy soil, in this drought, this climate. If you look carefully, you will see who loves grevillea: a little blue-hooded friend. 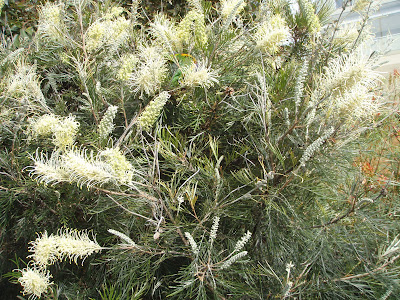 It seems I have been given a "Thinking Blogger" award by the lovely Meli, at
Northern lights
and the little book room
I'm rather flattered, since I admire Meli's wonderful musings and ideas, the effortless way with which she speaks about the world, books, places, images, and literary notions which might lie amongst the sediment of my brain were she not there to stir them about, like a conductor with a baton.
I don't know how many loved things have been reanimated by Meli's wand: Les Murray, Randolph Stow, the whole IDEA of Medievalism, York...things which become buried in the constant workings of my life, things which are not always allowed a place in my desperate (and often failed) efforts to be pragmatic, things into which she breathes life.

I am going to pass this thinking award to:
My crazy friend arcturus from notes from arcturus
I do so at the risk of there being a conversation about backless pants in his comments thread, but really...
If there is something this highly intelligent meteorologist/astronomist doesnt know about the skies, I would like to know what that is. His musings about the stars, the nebulae, and clouds are positioned against a background of existential angst and longing, his walks around Washington DC paint a vivid picture of real life in that city. He captures houses, grand or small, fragments of gardens and streets on his ramblings through the streets, gay bars, and open air cinemas, detailing a Life in the Empire of Bush as a cynical, often marginalised, highly educated gay man.
Arcturus reminds me that all of us have within us the capacity to love,that existence is boundless , and that the exquisite can be simultaneously near and far..

Ganching
It is likely that I am highly addicted to her lovely Irish accent, but her wry and amusing observations on life are particularly exquisite. I also find myself distracted repeatedly by her flickr account, transported by her beautiful images. Who doesn't love the Irish? This blog is a treat, and unlike real life, in which my irish friends, (particularly attracta houlihan), all seem to have a habit of hitting or poking me on the upper arm to punctuate a sentence every few words, Ganching doesnt hit me at all. And her stories are just splendid.


ampersand duck
Feisty, wonderful, sensitive and thoughtful...I love the interweaving of life as a Printmaker/Letterpress artist, mother of delightful small boy, and all round observer of life. If I was in a blind funk of shittiness and needed to go out and chat with someone, this would be the chick I'd do it with. From the joys of aesthetics of letterpress, to the blackest depths to which a soul can plunge, and every bright colour of the in between.


princess banter
Thoughtful and quietly provocative, The Princess discusses issues of living globally, of connecting with people around the world, matters of materialism, the pointlessness of many of life's exercises, relationships and love.


Here the blue bonnetted one feeds on a firesprite grevillea.
These ones glow like real fire, and are precisely the same ruby red as the Lorikeets'eye. 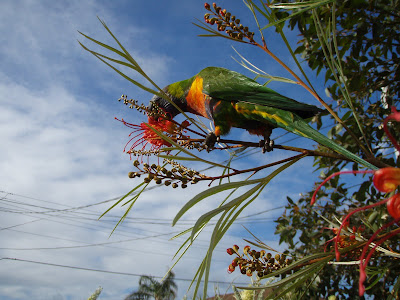 Oh, my ... I'm speechless ... That's probably among the top two or three nicest and most poetic things anyone has ever written about me.

(If it's OK with you, I'm gonna take the easy way out for my blog entry today and just post this excerpt.)

I have already discovered the delights of Princess Banter's blog, but now I have three more blogs to plunder. Thank you!

Gosh! Thank you so much for the lovely words, and what they above said.

I hope we ge the chance to have that chat some time!

Lovely words and pictures as usual, but as for the Smart Board... Tried to practise on it today and one hour and two technicians later the flipping thing was still assuring us that no signal was detected.

Yes, I can see it would be lovely (if it worked) for art lessons. For teaching the use of the apostrophe or the themes of a novel, a bit of chalk would do me fine until I get the hang of the Stupid Board.

Another lovely Fif post. I will have to investigate the other blogs too. I am always up for meeting new bloggers.
I have a cream Grevillea like yours, but the Lorikeets dont seem to visit. Only the black headed somethings?

Ha ha, I have just realised that I was supposed to give youse all this little logo thingy, which I'm not sure how to do.

I have just realised its all just a nice way to swirl the blog traffic around a bit, which is nice.

Ducky, you make me laugh.
jelly, thank you, your'e kind.
meggie, I'm not sure about black headed birds...wattle birds? Koels?
Isabelle, oh, the smart board and its lack of cooperation would drive m mad. Mind you, I did think of you yesterday with my trusty piece of white chalk in my hand...