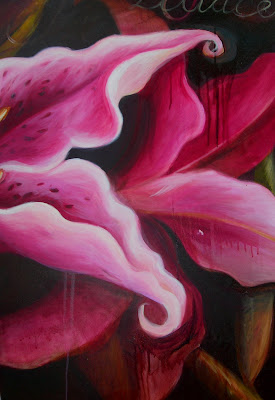 All threads of thought this week have taken me to France. Each conversation and drawing. Everything I read.
It didn't start with Bachelard, though he was in the thick of it. And I'm not sure where to start, though I could start at the bottom of the sea, which is where I usually start, if I wished, but just for a change I will not. I could mention Sartre and Beauvoir, but I shall not.

I have been to France rather a lot, considering that I live here.
Though living in the glary suburbs, my head wedged in books and dreaming of elsewhere, possibly had something to do with it.
Once upon a time, I thought I might live in France, but I never did. I spent eight years learning French, and last week discovered I could remember the word for garbage-bin, but not for blueberry. That the word for "garbage bin" was in fact a much nicer word in french for that of "dawn".
I was thinking that I cannot count in any language, except in colour. This is a true fact.
(green times green equals blue)
French numbers are lost on me. Cent, cinq,six, seize. All numbers are lost on me.

Though I have been there many times, it is a different place altogether every time I go. Perhaps each time I am a different person altogether.
The first time I arrived in Paris, I felt I had arrived into a Dickensian novel. I ate a croissant, and smelt the disappearing smell of the metro. Diesel.
Another time I was chased out of the Louvre for kissing a marble statue in the sculpture gallery. He was waiting for a kiss, though maybe not from me, but with my arm around his neck, on one toe, I gave him one.

Staying with a dear friend beneath the Sacre Coeur.
Looking through the gates of the Sorbonne.
Later, trips in the name of commerce, staying in posh Hotels. The breakfast buffet like every other in the world, enticing one to eat more than one might want.
not nearly as evocative as the first cheap croissant in the dickensian dark.

Le Piscine les Halles: an obnoxious body of water.
The Seine cannot be swum in. Nor the ponds at Giverny.
They scrubbed the Notre Dame.

Each time, it shifts to become a faintly altered yet familiar place.

I met a girl from Villandry last week. I said that she was the only person I had ever met that came from Villandry. She told me that I was the only person she had ever met to have gone there. Specifically.
One time I went to France, just to go to Villandry, though I was worried that my expectation would exceed the reality.
I had a bit of a botanical thing happening. I looked at plants and gardens in all forms. Chateau Villandry, Giverny, The Engravings, in the Louvre, of plants. No kissing that time, just buds and roots and overgrown dahlias and all manner of botanical item. Formal arrangements of flower in vases. Rows of flowers at the markets. Peonies. Aquilegia. Delphinium.

Reading French cultural theorists always makes me think that their ideas could only come out of France. Out of that particular intellectual background. Those Bachelard images, of Paris and the french countryside,of cellars and garrets, are so located in time and place that they are perhaps less archetypal for us , here and now. Well, for me, here and now.


I wonder what I will be like, next time I visit.
Perhaps I shall go somewhere else. Maybe Iceland.
Or maybe I should go see the ghost of that kissing girl, in the Louvre.
She ran fast, that girl.
I still run pretty fast, if I have to.

Beautiful images - especially kissing the statue! I've been to France a few times, and loved it, but I've always felt more drawn to northern and eastern Europe, for some reason - Germany, Russia, Scandinavia (also I don't speak a word of French). Thanks so much for your blog - it somehow clears my head.

France is a reoccurring phenomenon. Quite strangely, really.

I attempted the learning of both Russian and Greek.
I had an obsession with Russia and Russian literature for quite some time. I failed dismally in my attempts at the language, though I can decode the destinations on the fronts of Greek buses and frighten greek schoolboys with my mutterings.

I spent quite some time in Eastern Europe, in fact, I married Eastern Europe, in all its manifestations. I can pass myself off as any one of a number of nationalities, courtesy of both my surname and my ability to mimic my largely wretched relatives. My offspring are hybrids, though they favour the European side far more than my anglo-ness.

I tend to romanticise and mythologise the exotic. My world is bounded by horizons, but my inner world is a richly decorated landscape of art and myth to which reality does not always measure up.

I love your blog.
I wish Philip Pulman was published here, I guess there is always amazon.

I used to work in an etching studio. The technician declared once that I had to have lived in Medieval times,in a former life. To be a medievalist sounds like the granting of a magic wish.

The world is wonderful. There is so much to know.

Sounds very international! These days I work on keeping my feet on the ground, cos my head's in the clouds. I don't have as many problems with reality as I used to. Wonderful worlds do exist cos people have thought of them. You should be able to get hold of Philip Pullman over there. He's written a trilogy called 'His Dark Materials', and the first one is 'Northern Lights'. They are marketed for young adult readers but are very wonderful. Take care! m.

Your writing is as beautiful as your painting.

Ah France. I once became engaged to a boy there, and loved everything about him that was different from everything I'd even known in Las Vegas and Los Angeles.
I did a google search on him recently, and saw that he won a bike race from Paris to another city. He was mostly bald in the photo, and he had a wedding ring, and I thought how he could have been my husband.
Surreal.
But oh how I miss those days, and crepes with Nutella and the wet cobble-stoned walkways....